Breakdown of Costs
1 Available
1 Unavailable
Start Date
Age at the end of the tour
*This tour does not accept children under 7.
Travelers
Overview Day by Day Rates Inclusions Getting There Offered By
Request a Quote

Khalanga Safaris is a licensed provider of tailor made and of packaged tours, transfers and safaris in Limpopo and Kruger National Park. As a permitted OSV operator with own vehicles, Khalanga Safaris combines high service standards with expert knowledge and a profound understanding of nature to create an unforgettable safari experience. We offer safari packages and combined tours that include cultural and culinary experiences as well as scenic excursions in the region.

Extremely charismatic and passionate about his job

It was such a great experience, Best game drive tour so far, Mr.Shoes is extremely passionate about his job,

He explains very well everything you need to know about the animals and likes to respect their habitat, he is very patient with his customers and is willing to help you find the best places to take pictures of the wildlife.

Definetly worth the value for the money. I highly recommend.

Round transfer from Hoedspruit to Polokwane and back. Enjoyable, safe, good conversation and prompt

The communication was excellent and interesting and informative. John was born in the Timbavati and his knowledge of the Tsonga culture was interesting. Our conversation made the trip go all too quickly. The service was excellent; the vehicle was clean and he was sensitive to our personal needs along the way. The transfer surpassed our expectations and we will use Khalanga again. Also we look forward to taking a trip with him in the Kruger as soon as this is possible for us.

We had amazing two days with Shoes. He picked us up early in the morning and we spent two whole days with him. The first day was very hot (over 42 degrees) but he still managed to show us lots of animals.
It was incredible to see all the wild animals so close. It very interesting to listen to Shoes as he knows everything about the park and the animals. He was able to answer all the questions we had. He's really good in spotting all the animals. We were really happy to see all the different kinds of animals (also the small ones like birds, lizards, dassis,...).
We made breaks for breakfast and lunch and he always made sure to show us the best. Because of him we tried a local speciality called PAP and we loved it.
Also the booking was very easy and Johanna informed us about everything. Thanks to Shoes & Johanna for the great time we spent in Kruger National Park.

Our Guide Shoes met us on time at 06:00 in our lodge. After "imigration" formalities at Kruger Gate, Shoes let us participate of his enormous knowledge of all what has to do with Kruger: plants, animals, enviroment. We booked a "private tour" (three persons) and enjoyed every minute on this 200 km trip through pure nature. Khalanga Safaris with his owner Shoes is probably the best address for a breathtaking tour.

Khangeli Safaris was so much better than expected

A thrilling three night adventure to a secluded location in Hwange National Park. Mike Scott and crew provided a wonderful personalized experience for the two of us overlooking a river filled with Hippos and close to the territories of two adult male lions. Khangela safaris is highly recommended. Our chemistry with Mike Scott, Heather, and Barnard was top notch and we enjoyed sitting around the fire after dinner laughing and sharing as much as we enjoyed travelling around just a small part of this huge park. We saw alot! There were some mixed emotions as there was one of the worst droughts of the century and sad to see several dead elephants but this too is part of nature and yet it was balanced with seeing several lions, huge herds of zebra and cape buffalos, the yawning of hippos in the river, and the beginning of rains filling in empty river beds. Almost immediately after the first rains, the leaves began to appear on the mopane trees. Lots of birds, and rare sitings of a tortoise and rock hyrexes. We were truly the visitors within a pristine campground and everything is environmentally sustainable leaving no footprint that we were ever there. The safari was the highlight of our trip to Victoria Falls environs and then to Ethiopia... We did also spent a day at Chobe National Park in Botswana that allowed us and tens of others to see many elephants both on land and from the water. But, we will always cherish our special days of just the two of us with Khangela Safaris that have left us with many memories and fantastic photographs. It was exhilirating, it was fun, it was so so much better than we could ever expect. Kudos to Khangela for making our visit top notch.

Our Guide Shoes met us on time at 06:00 in our lodge. After "imigration" formalities at Kruger Gate, Shoes let us participate of his enormous knowledge of all what has to do with Kruger: plants, animals, enviroment. We booked a "private... 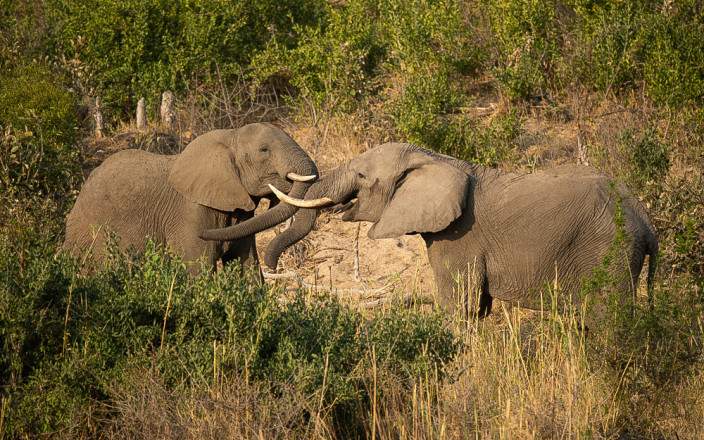