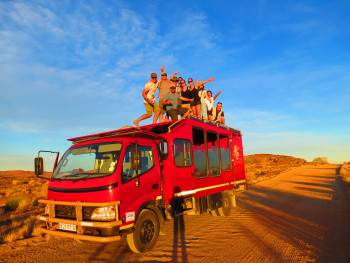 Superbly organised safari.
Great interaction with our guides,fabulous knowledge of animals etc.The wild camping was a
terrific experience sitting around the fire at nights hearing the animals and
seeing the star filled skies.Food prepared was extremely good,catered
for all tastes.Everyone helped each other.To see wild animals in their natural habitat and absorbing the
grandeur of the landscape was a dream come true,thank you Sunway.
Value for money 10/10
BT14 tour,28th August-10 September

Was this review helpful? Yes No
Link to This Review
Nancy and Michal Bardecki   –

Awesome; everything we had hoped for and more

We took the 16 day accommodated Game Tracker through South Africa, Zimbabwe and Botswana. We enjoyed every day of our trip. It was our first safari and so everything was new to us; we never tired of seeing the birds and animals and even just driving though the countryside.

Our guides Chris and Joseph were outstanding. They always gave us a briefing about what to expect the next day, after dinner in the evening. They provided a wealth of information about the birds, animals, the culture and the landscape and even the economies of the countries we visited.

We had a nice mix off meals in lodges/restaurants and meals made by the guides. Everything was delicious and by and large very healthy as well. While we were in Okavango, we had koodoo (farmed, not wild) stew.

The lodges selected by Sunway were great- very comfortable and they usually had very nice grounds that were good for bird watching.

Some of the restaurants are still learning about the logistics of serving customers and getting them their bills. But the guides are aware of this and so we usually placed our orders ahead of time so there were not long delays getting our meals.

We absolutely detest camping, so we were not big fans of the accommodation in the Okavango Delta. If you like camping, it would be great. But anyway, we loved the whole Okavango experience. It was definitely worth any shortcomings with the accommodation.

The local guides selected by Sunway for the most part were excellent. for example, our guide for Thebes River in Botswana seemed to know exactly how to position the boat and the safari vehicle to get the best pictures.

Our favourite parts of the trip were the Thebes River cruise and game drive and the salt pan (for the birds).

The vehicle we used to get from venue to venue was called the red elephant. It is a custom designed truck. The seating was comfortable and you got good views from the windows. We always had snacks available, mostly local fruits.

Of course what everyone goes on a safari for is the animals. We got great views of lions, buffalo, hippos, elephants, rhinos, giraffes, koodoos, impala, monkeys and much more in many of the places we visited.

2 people found this review helpful. Did you? Yes No
Link to This Review
James   –

Hint: other travelers will love reading about your experience of the communications, service, value for money, reliability and the tour itsel

Was this review helpful? Yes No
Link to This Review
Lorraine   –

I did the rainbow route and it was amazing! Our tour guides Jeff and Norman were the best! They should really be chefs, as their cooking was fantastic! They always did everything in their power to ensure everyone was happy

Was this review helpful? Yes No
Link to This Review
Anna and family   –

We recently returned from a safari through South Africa and Mozambique, including stops in Zululand and Swaziland. This was our first trip to South Africa, so it was not without some trepidation. Well, our holiday was up to, and actually exceeded, all our expectations. The places visited, accommodations, activities, food and general organization were excellent. Our guide, Clinton J Venter, did everything to make this trip amazing. He was really professional and knowledgeable of wildlife, and at the same time friendly and good humored. A perfect driver. We've always felt safe! I would highly recommend this trip to everyone. Thank you Sunway Safaris for excellent organization, we'll travel with you again.

1 person found this review helpful. Did you? Yes No
Link to This Review
Ulli and Thomas from Austria   –

Our hiking tour through South Africa, Swasiland an Zululand was wonderful. Our guides Colly and Cloud from Sunway did a fantastic job spotting moving rocks as animals from far away, sharing all their huge knowledge about wild animals, history and living conditions with us and showing us very beatiful scenery on our hiking tours. They are very kind guys, well organised, excellent cooks and deal with all upcoming questions in a way everybody can feel well.
The accomodations were fine, it´s a good idea to stay two nights and than move on to the next. The small group of five made the bus to our mobile living room.
Thank you so much for the gorgeous experience!

2 people found this review helpful. Did you? Yes No
Link to This Review
B.N.   –

Just back from an unforgettable Sunway-Safaris Tour to Okavango Delta and Victoria Falls with German speaking, perfect guide Wouter („as almost a part of the group“, always available and left no questions open) Driver William also a very experienced, carefully driver.
Because both of them, we have discoverd the „Big Five“ at the first days already.
Our „Red Elephant“ (Safari Chariot) was perfect suited for all "challenges".
Thanks for the great time, will recommand to others !

4 people found this review helpful. Did you? Yes No
Link to This Review
Sybille   –

At the beginning of November, I joined the Botswana Wildside Camping Safari (14 days). It was a magnificent trip starting in Johannesburg, passing some of Botswana’s national parks and ending in Livingston to visit the Victoria Falls. It was a well-organized and divers program – game drives and camping in remote areas as well as cultural interaction in the cities. One of my favourite points was the journey in a traditional makoro (narrow dugout canoe) to an island in the Okavango Delta, an enormous wetland area with pristine wilderness. Traveling in small groups was a major benefit to simplify the processes – it was more like a family than a group.

8 of 14 days we did some wild camping in the national parks. This was an authentic wildlife feeling with extended game drives in the morning and evening (siesta in the afternoon due to the heath). We were very lucky that we saw a big variety of animals and got plenty of time to observe them in detail. Please note that there is quite a bit of time spent in the vehicle (game drives, travel time…) but the seats are comfortable and the landscape is varied. So time is running fast. The meals made on the campfire were delicious and contained many fresh ingredients (tasty alternatives for vegetarians). Even in the outback, we had simple facilities (bucket shower every second day and bush toilets). Camping equipment, cooking tools and vehicle were in good conditions.

Local and experienced guides make a huge contribution to the success of a trip. Our guides/drivers were outstanding and complemented each other. Farai and Moses, our lovely guides, have profound knowledge in the field of wildlife, country-specific features and African traditions. They took care of us and showed us their countries from the best side. Farai was responsible for the overall organisation and the cooking part whereas Moses drives us through the landscape. Moses is a professional Botswana guide with big experience and true hospitality. Besides reliable driving, he showed us the (hidden) spots where we could track games and give in-depth background information. ET was the driver of the backup track with the kitchen and our baggage. That’s a responsible task as well. With his friendly manner, he was part of the group and helped to set up the campsite or to break down before leaving.

Thanks to the people that make this trip amazing! I’m looking back to great trip and an unforgettable experience. It was an authentic wildlife experience - this sounds like an advertisement but it’s the truth. I would highly recommend this tour to my friends.

We had an absolutely amazing camping safari in Botswana with Sunway Safaris. It was extremely well organised and run very smoothly. Our main guide, Petros, was outstanding. He was extremely knowledgeable about the wild life and enabled us to have some interactions with wild elephants that were amazing. I felt safe and looked after all the way along. The time in the okavanga delta with the locals there was really special. I was very glad that we had Jame with his superb driving skills on these difficult roads. Food prepared by Petros and Dineo was delicious and I was very surprised about what you can cook on a campfire! The wildlife was wonderful - it's easier to list what we didn't see (a cheetah) than what we sae - we even saw a pack of wild dogs! We returned with many many magic memories. Thanks!

3 people found this review helpful. Did you? Yes No
Link to This Review
Stephanie Berman   –

Wonderfully organized to maximize the best of South Africa

I recently returned from the Sunway Safaris Rainbow Route, 17-day tour across South Africa. I have never been on an organized tour of this length and wasn't sure what to expect. As a solo traveler, I was incredibly impressed with the organization of the tour, the tour vehicle "Red Elephant," and and the expertise of the guides. Yes, there was quite a bit of time spent in the vehicle (it's great, but if you go during the winter, make sure you have layers because it can be cold in the mornings), but a lot of that time was spent during safari game drives and in order to be able to cover the ground that we did. There were a few days with really long drives, but because we left early in the morning and stopped for an activity along the way, the drives didn't feel that long. At Kruger and the other safari parks, we saw some unbelievable wildlife sights (e.g., pride of 12 lions, lions eating a recently killed buffalo, mother lion crossing water with baby, all Big 5 on two days in a row, elephant walking to water hole) due to the skill level of our guides, Phuma and Farai. Our guides were the perfect pair and complemented each other beautifully. After a few days, it felt more like a family than a tour group. We only had 4 in the group, but the limit is 12. We were also able to see fabulous marine wildlife including humpback whales, southern right whales, seals, etc. I was also incredibly impressed with the accommodations which exceeded my expectations. For the first two weeks, we were in somewhat remote locations (with the exception of Kruger), which were very peaceful. The last week when we hit the garden route, it became a bit more crowded with tourists, but was absolutely beautiful! Overall, I would highly recommend this tour and this company.