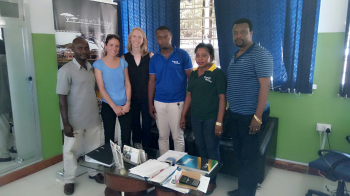 That was an amazing trip. I recommend it to everyone who want to have a great safari.

I find your company very professional and I was very happy of your services.
The trip was great; food, activities and accommodation were perfect and if I have to do it again I wouldn' t change anything.
I also liked the way you behaved with us, people were very welcoming and helpful.

Was this review helpful? Yes No
Link to This Review
Josephine.   –

We have been to Africa before but always stayed at lodges. This time we wanted a tented camp experience and locations in the northern Serengeti for the great migration crossing the river Mara, and I can say is one of the wildest and best experience ever.
Our guide was a gem.. He was very knowledgeable about animals and birds. wonderful books on birds and animals the he would use to answer our questions. over a half mile away and we were the only ones to see her that day. Same for a leopard and seeing it have its lunch. When We visited also a masai Village, we loved this experience and shared with the real masai for the whole morning. We were glad that the company and ourselves could contribute to support economically the community for they live in such a hard conditions.
We had an incredible time. Thanks again guys to make of our safari a fantastic experience.

Overall, we had a great first-time safari with TravelPartners. Arranging the safari from London was very easy - I was able to tailor our itinerary over Whatsapp and email quickly and efficiently. We paid half upfront by SWIFT transfer and the rest on the ground. Be aware that taxes can be added on to credit card payments, so cash is better.

We flew into the Serengeti on effectively our own charter flight, which was fabulous! We were then picked up by our driver in the Central Serengeti and managed to see a live cheetah kill in the first hour! Our jeep was great - a Landcruiser with a pop-up top. We spent the next few days in the Serengeti seeing all of the big 5 (aside from the rhino) and chasing the migration. We didn’t quite get a river crossing (it was a bit late in the year for that), but had amazing experiences chasing leopards around in the rain and listening to hippos grunting outside our mobile migration camp in the Northern Serengeti.

We drove out of the Serengeti to Ngorongoro Crater, where we saw (at a distance) a black rhino - finally! Our accommodation was mid-high end and was therefore pretty impressive.

The national parks have strict clock-in and out times, which we were unaware of, and this affects how much time you can spend in them on safari, so it is very important to ask for this information up front. As a result, we had an extra day of safari time which we wouldn’t have been able to use if we had not negotiated (while on safari) to include Lake Manyara national park - which worked out well in the end.

As you are now not allowed to go on walking safaris in the Serengeti, you spend a lot of time with your driver, so it’s important to establish a rapport. Anderson, our driver, was very knowledgeable and accomodating. When asked, he was able to offer up lots of interesting facts on what we were seeing.

All in all, we had a great safari experience covering more or less the entire Northern circuit. Flying in saved so much time, allowing us to fit more in. Thank you to the team at TravelPartners!

2 people found this review helpful. Did you? Yes No
Link to This Review
Richard   –

A trip of a lifetime

I highly recommend this company with no hesitation, particularly as I was a single traveler and they managed to put together a group that was a perfect match. I made great friends And I will cherish those moments admiring the Serenegeti sunset for a lifetime .  Many thanks!

1 person found this review helpful. Did you? Yes No
Link to This Review
Chichi   –

They exceeded our expectations.

As first-time travelers to Africa, we had many questions, and the team responded patiently and with details to all our questions. Our guide and driver was one of the most knowledgeable and friendly tour staff we have ever met - we were sad to leave him.  We recommend Travel Partners to anybody wanting to do a safari in Tanzania.  Our expectations were high, and they were exceeded!

1 person found this review helpful. Did you? Yes No
Link to This Review
GAYOS   –

My husband and I chose this company to coordinate our honeymoon in Tanzania and it was the best decision we could have made. The trip went into detail making sure that every single aspect of our trip was exactly what we wanted - it felt like a truly tailor-made experience.
They guide came to pick us up from Kilimanjaro airport with operations team and gave us a briefing on our trip. We were already so excited! everything went perfect. Every hotel that our trip designer recommended was beyond our expectations. Among other hotels, we stayed at the Serengeti heritage tented camp while on safari and the Hilton Double tree in Zanzibar. Both were stunning and the service we received was incredible.
I would 100% recommend this company to anyone looking at a private African safari.

One of the best trips i've ever had

My trip was awesome with travel patner

I enjoyed alot during the trip, the service was perfect. And i was interested much with the residence

Travel partners is the best. The service provided was good, i really enjoyed my safari tour.

2 people found this review helpful. Did you? Yes No
Link to This Review
Mubanga   –

wow I really have no words to describe the magical experience I had. The nature and wildlife were just breathtaking. I really had a great time and plan on visiting again soon.