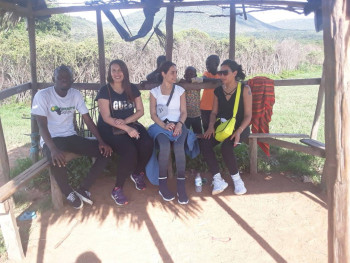 One of Our guide in Maasai Mara village

DO NOT USE THIS COMPANY THIEFS

Paid $ 3,700 plus $500 to the owner called Benard Orero and ended up in a really bad situation okay, at the Airport this Benard never came, the Hotels This Benard never paid so I had to pay again..I reported this to the police already...never fall for his cheap promotion totally not worth you will end in shit hole situation with this unprofessional company.

Was this review helpful? Yes No
Link to This Review
Catherine   –

Perfect holiday and great service
Benard was super accommodating to any changes we needed to make our first safari to me perfect.
He was just fantastic and helped us choose the good lodges in Masai Mara and Lake Nakuru.
Everything promised was delivered, we definitely recommend and will use Urbema Safaris again!

The team did an exceptional job planning our 13-day Safari to Kenya! We went to Nairobi, Samburu, Ol Pejeta Conservancy,Lake Nakuru and Masai Mara, we enjoyed planning our trip with urbema safaris. Bernard and the team were there for us every step of the trip. Thank you

Was this review helpful? Yes No
Link to This Review
Cindy   –

It was a lovely trip! Great itinerary and wonderful guide. Activities and parks were perfectly designed. Especial thanks to Benard for helping us plan our trip. We had an awesome time!

Was this review helpful? Yes No
Link to This Review
Kennedy   –

Excellent itinerary - What a great experience we had on our 16 day trip Bush and Beach Safari. We loved everything about the trip and learn so much about the people and their history. Our guide, Moses, was incredible and a wealth of information.

Was this review helpful? Yes No
Link to This Review
Annah   –

Esther was very friendly and very accommodating. Thank you for your service and we will definitely use you again.

Was this review helpful? Yes No
Link to This Review
Gabriel   –

Our experience to a week-long tour to Kenya was superb. We saw not only the usual tourist parks, but several that were certainly off the beaten track. The visits to the Masai Village and the Nairobi Museum were fascinating. The accommodations were excellent and the meals, superb. Our guides was enormously knowledgeable, he did a wonderful job of sharing this knowledge.

The Lake Bogoria trip was fabulous! We loved it.

Your service was quick and very clear in managing our travel details.
Great job.

1 person found this review helpful. Did you? Yes No
Link to This Review
Catherine   –

This was our first time Africa safari and I would say that it exceeded my expectations. The tour guide Jared was wonderful, very detailed oriented and organized. Thanks Urbema

Thank you for your review, Catherine! We're so happy to hear that you had a great time on our tour