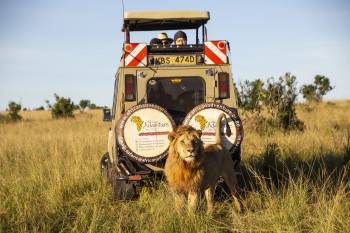 Our trip to the Mara was unforgettable. Had a smooth ride, lots of animals to see and their meals were superb. kenyan delicacy will always be the best.

He was considerate and knowledgeable about the area

Award winning customer care services. Proven to be offered at its best

Was this review helpful? Yes No
Link to This Review
Amos T   –

All the guides that we worked with were the best I have been associated with and are highly recommended. The hotels were 4 stars or better, clean and well-appointed. We thank you AAS Kenya for your service.

Was this review helpful? Yes No
Link to This Review
Bismark_Kipyegon   –

Safari bookings basically have excellent services. An outstanding management that gives a world class experience all through.

Was this review helpful? Yes No
Link to This Review
Mercy Oso   –

He was a composed and friendly guy

I've always wanted to see the big 5. Then one day I came across an article about the only national park in the world in a capital city, the Nairobi national park.
A friend recommended Africa adventure specialists and they didn't disappoint even a little bit.

Was this review helpful? Yes No
Link to This Review
Anonymous   –

Going on safari was a lifetime dream of mine. When my husband finally agreed to embark on this adventure I could not be happier. We had used African Adventure specialists and were excited that we were allowing an experienced company create our itinerary. My husband specified which lodge he wanted to stay in as well as his expectations and we thought the rest would be taken care of.
During our trip we started questioning the total cost of our trip because it was off season as well as the prices seemed outrageous compared to people we were talking to who had similar trips planned as us.
We started investigating and speaking to hotel managers and lodge owners and when they saw our furry they all printed out the exact invoices as well as the transfer amounts made by African adventure specialists.
After receiving all the invoices and transfer statements we realized that we had truly been taken advantage off and we were way too trusting.
African adventure specialists overcharged us $9,654.
On top of that, after we had confronted them, instead of making it right they proceeded with fake promises and then completely ignoring us.
The last day of my trip was spent waiting at the lobby of the hotel for “proof” from African adventure specialists and after reassuring the hotel they were on the way nobody showed up.
It’s been two weeks of running after someone to get some answers and there is no responses.
I would never recommend this company to anyone if you don’t want to be robbed..
I’m sad that my dream trip had to end this way.

Was this review helpful? Yes No
Link to This Review
Buukhaba Zhumaeva   –

Incredible wildlife experience,
We had such amazing time and we saw everything we hoped to and so much more.
We highly recommend African Adventure Specialist they were exceptionally friendly, helpful & welcoming
Thanks to the entire team for giving us so many wonderful memories
Buukhaba, Steve

The staff were very friendly and helpful when I first called them to book for my trip.
The airport transfer was done very professionally.
I would definitely recommend them anyday.

Was this review helpful? Yes No
Link to This Review
Jean Pierre   –

I loved the way the African Adventure Specialists took time to plan our travel while taking us through every process in a detailed manner. The fact that they were very sensitive in regards to Covid-19 protocols was an additional plus on their end. Our experience in Africa, being the first time was made easier and more interesting thanks to AAS. Worth a five star from me.

1 person found this review helpful. Did you? Yes No
Link to This Review
Adelight James   –

Value for your pocket.

Our group tour to Kenya was great. The boys had fun all the time. African Adventure tours is a good pick.