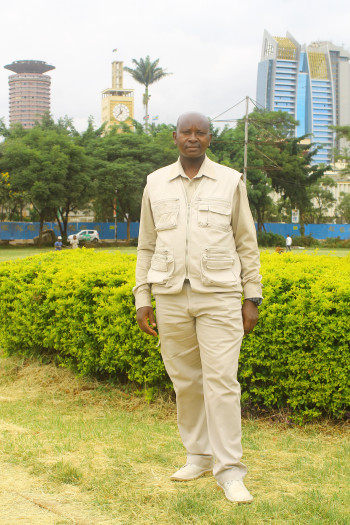 Excellent facilitation overall by Maasai Mara Train Safaris. I'd seen the Big 5 in a day- that most visitors did not. Thanks to driver Sammy who is very experienced in the area- from Nairobi to vast game reserve of the Maasai Mara region. He was able to dodge traffic jams in the highway and get a good vantage point to see the animals in the Reserve. On our way to and in the area, Maasai Mara Train Safaris personnel calls to check my whereabouts, explained my onward journey, and answered my questions. The driver ensured we had food and water for the day, was able to keep time within limits, and was also able identify and talk about a few important characteristics of the animals which was all I need. And given that I was on a low budget (I paid the lowest fees compared to my fellow visitors on the same journey), it was truly the best value for my money.

Some areas I could recommend- is to maintain a First Aid Kit in the vehicle for common motion problems. The driver must also know how to administer basic first aid procedures and AR. Additionally, it will make the travel more interesting if the driver could be better organized to tell significant stories about the places being travelled and visited- although this might to too much to expect from them, considering their role in the journey, and that it may require time and training resources to get them to that level.

Overall, it was an exciting adventure in the Kenyan Maasai Mara outback. Thanks to MAASAI MARA TRAIN SAFARIS. You deserve a big 5-star!

Was this review helpful? Yes No
Link to This Review
Yang   –

Most unforgettable part about Africa

The Masai Mara Trip with Mr Wilson is certainly my favorite part about Africa! The guide and the local driver had rich experience in Safari and thanks to them we managed to see almost all wild animals that we expected to see. Will definitely recommend it to everyone.

1 person found this review helpful. Did you? Yes No
Link to This Review
Zhou   –

The best experience during the whole trip

The attitudes of the guide,the cook and the driver are really good.

1 person found this review helpful. Did you? Yes No
Link to This Review
AHMED   –

I just finished my amazing SAFARI trip to Maasamarai whit the help of Mr Wilson. No doubt it was an incredible experience for me and with the help of my guide i was able to enjoy every bit of moment not only in Maasamaria but also in Kenya.....Due to commendable cooperation of my guide, surely in future I will again intend to take other trip to Kenya and that too not without the guidance of Mr Wilson

Was this review helpful? Yes No
Link to This Review
Sandro   –

Amazing climb on the roof of Africa

Together with my girlfriend I climbed the roof of Africa. We booked a 8 day climb on the Kilimanjaro with Wilson's organization starting from Nairobi. Unfortunately he could not join us on the trip. But he really took care about us and our trip. He organized everything from Nairobi and supplied us with the gear we didn't bring by ourselves the day before the start of the trip. The guide who joined us on the mountain was a friend of him and came to take us at Nairobi. Wilson brought us to the bus station at the beginning and came to pick us when we came back. The tour was well planned and the team very friendly, funny and qualified. The only thing that was not really okay was the transport from Arusha to the gate of the Mt. Kilimanjaro National Park and back. The car was too small and in a bad condition. Nevertheless we will definitely never forget this experience and can fully recommend a booking with Wilson's organization.

2 people found this review helpful. Did you? Yes No
Link to This Review
Mauricio Ricaud   –

Amazing experience in one of the best places on Earth.

Great availability, Wilson replied quickly to all my questions before arriving.
We felt safe during all the tour. He was flexible to meet our wishes.

Was this review helpful? Yes No
Link to This Review
Ricard   –

I was only for few days and mostly working in Nairobi, but I still found the time to do a couple of city tours with Wilson. And, for sure, if I go back to Kenya and have the chance to explore a bit more, I will do it with him. He’s a very cool, dedicated, professional and reliable person, and although I did not see him in ‘adventure’ action, I am sure his wide experience and proven skills make him an excellent trekking/mountain guide. Looking forward to go on a nature trip with Wilson next time!

Was this review helpful? Yes No
Link to This Review
JK Choudhary   –

It was a memorable trip. We had great time during our three days Maasai Mara Trip. The staff at all levels i.e. Driver of the Car, Camp Staff and our trip coordinator Mr Wilson are very experienced and they had provided exceptionally good hospitality to us. Specially the driver has put his best to make it possible for us to see maximum Wild Animals during our trip. Overall we enjoyed a lot. Thanks

1 person found this review helpful. Did you? Yes No
Link to This Review
Karl   –

I hiked Sirimon route up and Chogoria route down on Mt Kenya with Mr. Wilson in February 2019. The experience and the service was really good in every way. The lodges where we stayed overnight were really nice, and the food provided during the tour was extremely good. A lot of food (way more than we could eat), well prepared and good tasting.
Mr. Wilson did a great job as a mountain guide and made sure that we managed to reach Point Lenana. So if you´re looking to climb Mt. Kenya, I can highly recommend this company.

1 person found this review helpful. Did you? Yes No
Link to This Review
Felix   –

In March 2017 I booked a Safari on Maasai Mara Train with Wilson. I went to Maasai Mara, Lake Naivasha and Lake Nakuru and I really enjoyed it. I was the only one who booked with him so I was in a group with people from another agency and everything went well. Only on the first day we had a little car problem and missed the evening game drive but the next day we did a longer drive instead. Unfortunately I didn't see rhinos and leopards but many other beautiful animals such as lions, elephants, giraffes, cheetahs, buffalos, hippos, crocodiles, monkeys, ... And I liked the landscape around the two lakes a lot.

Because I had such a good time on the Safari I also booked a Mount Kenya trip with Wilson in April 2017. We were 2 tourists, Wilson as a guide and his brother as a cook and went up to the Lenana peak. There was a list what to take with me but Wilson provided everything that I didn't have including walking boots, sleeping bag, gloves and a flashlight. The last night before the summit at 4200m was quite cold and we had to wake up around 3 the next morning but seeing the sunrise on Mount Kenya was totally worth it. And on the way down where it was getting warmer again breakfast was already waiting for us. By the way the food was much better than I expected it to be on a mountain. We had chicken one day and fish the other day and always a lot of Chapati.

I had 2 really good tours with Maasai Mara Train and can highly recommend them.