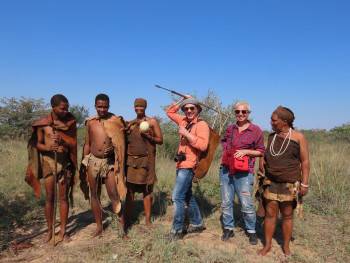 I booked this tour through Lucky who saw to my every request from leopards to Bushmen, lucky enough to see 3 Leopards and 2 Cheetahs travelled from Savuti through to the Kalahari and back to Maun, driver was exceptional along with cook who provided us some lovely meals, tents were roomy felt safe and looked after throughout our Botswana tour

If you want an adventure that is authentic and real, then Kalahari Marsh Safari is for you. In Botswana, camping amongst the wildlife, with experienced, knowledgeable guides, who know the terrain and animals that live there. You are close to the most stunning wildlife and are able to live and enjoy them in their own habitat whilst feeling totally safe with the guides who know their environment.

It will be an experience you will not forget!

Was this review helpful? Yes No
Link to This Review
Hjalmar   –

Perfekt set up for a short 1 night 2 days Trip with makoros and camping in the Okavango delta. Flexible and nice guides, very nice experience.

Was this review helpful? Yes No
Link to This Review
Anthony Jordan   –

SAFARI AT ITS BEST!

We travelled as a private tour on a 15 day tour in Botswana with Kalahari Marsh Safaris, starting at Maun, through the CKGR, Makgadikgadi Pans, Nxai Pans, Moremi Game Reserve, Okavango Delta, Khwai Concession, Savuti and Chobe National Park, transfers to Victoria Falls Zambia in April 2022 – our first safari experience – very personal and customized to our own wishes. Communication with Kalahari Marsh Safaris was extremely friendly and efficient, without complications.

The tour itself was absolutely amazing – We exceeding all our expectations! We saw many aspects of Botswana’s amazing flora and fauna and experienced it in various ways (game drives, boat and mokoro overnight in Okavango Delta, bush walk in an Island) unforgettable! The team that accompanied us (Thuso, Russel and Lucky) was wonderful. Thuso is the best safari guide we could have imagined – he has a huge knowledge on so many aspects of the safari animals and nature, and his great experience and patience in searching also for the rare animals made us see essentially all of them!!! Russel’s cooking over the fire was delicious! The tents and all infrastructure – up to the bucket showers – were nice and convenient. Sitting around the fire in the evenings. The 15 days passed much too quickly; saying good bye was hard as we had all become friends. If you want to visit Botswana I highly recommend Lucky to be your host.

Was this review helpful? Yes No
Link to This Review
Masego Mmile   –

Best of the best

Our first experience with Kalahari Marsh Safaris and definitely not the last. Our 10 day tour to Okavango was organized by Lucky who was always reliable, at all times, friendly and patient with us. We did not have a clue of how an African is, with his knowledge he helped us well and everything became possible. The tour organizer Lucky has always been reliable and communicating well responding to our emails every time we need clarification, everything was perfectly organized and managed, with professionality. I highly recommend Kalahari Marsh Safaris for any Botswana Safari. They are knowledgeable, professional guides who have been working in the safari over 20 years, approachable and receptive. If you want to visit Botswana I highly recommend them, keep it going Lucky!!

Was this review helpful? Yes No
Link to This Review
Elisa Vadanovici   –

I arrived in Africa at a difficult moment (beginning of the corona virus pandemic) but Lucky has been here for me and helped me to have a beautiful experience in Botswana. Thanks to him I went to the north and was able to visit the delta and some parks! It has been a wonderful experience and he made sure to help me respect my budget and see everything I wanted to see. Unfortunately I didn’t had enough time to spend but I know I will come back and go on other tours with lucky and his team because it’s the only way to get a truly authentic experience with locals and respecting the environnement. Thanks!!!

Was this review helpful? Yes No
Link to This Review
Aayushi   –

Was this review helpful? Yes No
Link to This Review
Isabelle Niederberger   –

1 person found this review helpful. Did you? Yes No
Link to This Review
Anastasia   –

3 people found this review helpful. Did you? Yes No
Link to This Review
Prev
1 2
Page 1 of 2
Page 2 Next