The park is home to most of the common safari animals, including four of the Big Five. Buffalo are abundant and there is a large concentration of lion and leopard in the south of the park. The park is most known for its elephants; big bulls steal the show when they raise themselves up on their hind legs to reach the top of the trees.

Mana pools has a very high density of wild dog. There are currently six packs with 100 adult dogs in the park. Seeing these social animals interact while on a hunt or while denning is a real treat. Fearless honey badger, usually extremely secretive, may sometimes be spotted at night around some of the camps where they have become habituated to people.

The Dry season (from July to October) is the best time for wildlife viewing in the park. Wildlife is easier to spot because vegetation is thinner and animals gather around the pools on the floodplains of the Zambezi River. Many roads become impassable in the Wet season (from November to April). 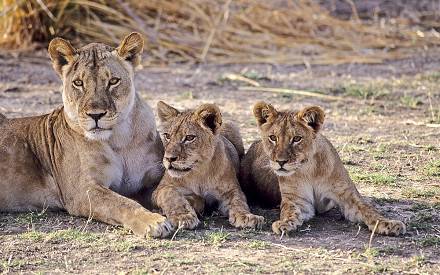