Namib-Naukluft has a hot and extremely dry climate with very little rainfall. Temperatures can peak well above 38°C/100°F during summer (November to April), but nights can drop below freezing point in winter (October to April).

The altitude in the park varies widely; Sossusvlei is located at a low altitude and temperatures get very hot. The higher altitudes are mostly in the Naukluft Mountains section where it tends to be a bit cooler.

Winter –May to October

These are the coolest months bringing relief from the oppressive heat at other times of the year. There is almost no rain at all and it gets drier as the winter progresses.

The summer months are hot. Although daytime temperatures average 27°C/81°F, they frequently rise to 38°C/100°F and above in low-altitude areas of the park, including Sossusvlei. Early mornings average around 14°C/57°F. Summer corresponds with the Wet season, but rainfall is low. 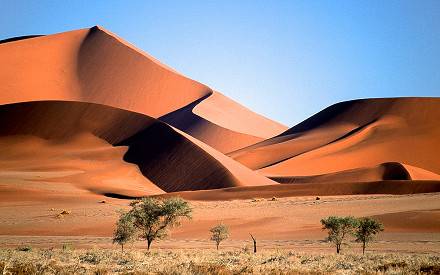