Anthony is a renowned Africa expert and author of many Lonely Planet guidebooks, including the Botswana & Namibia guide.

Anthony is a renowned Africa expert and author of the Botswana & Namibia Lonely Planet guide.

Anthony is the author of the Botswana & Namibia Lonely Planet guide.

Linyanti Concession is part of a big ecosystem, and most large safari animals are resident or migrate through. The park lies on an elephant migration route, and in the Dry season, elephant numbers are phenomenal. Lion, cheetah and the endangered wild dog all occur in good numbers. The water-loving red lechwe is abundant, and less common antelope species include roan and sable antelope.

During the wet months, from November to April, the area is home to the calving and migration of zebra. Night drives are part of the daily program in Linyanti, and some of the species that might be spotted after dark are the springhare, which favors the Kalahari sands, lesser bush baby, aardwolf, serval, large spotted genet, and maybe even the elusive pangolin.

Linyanti has seasonal wildlife viewing. The dry months, from May to October, are the best time to see large concentrations of animals. The Wet season months, from November to April, are special for the zebra migration. 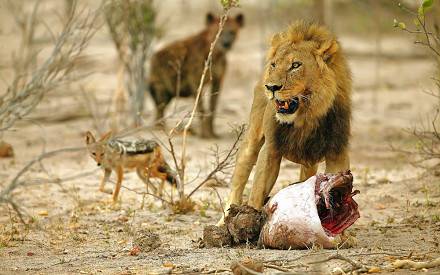