Mokolodi is more a zoo than a wildlife reserve, but there are a lot of animals that can be seen in a natural setting. Introduced wildlife includes white rhino, giraffe, zebra, kudu, impala, waterbuck, klipspringer, baboon and hippo. A couple of cheetah are kept in a separate enclosure and a drive-through cheetah-experience including an educational talk is available for advance booking.

White rhino and giraffe can be tracked as an activity, and there is a reptile center with an opportunity to hold a python. The two-hour night drive offers a chance to see some of the nocturnal animals in the reserve, such as porcupine, wild cat, brown hyena, serval and aardvark.

Due to the nature of the reserve, there isn’t really a best time for wildlife viewing, as is the case in the bigger reserves that are part of an ecosystem. The only consideration is the condition of the roads. If you are self-driving in the reserve, a 4x4 is essential in the rainy season, from November to April. The reserve sometimes closes from December to March, so it is advisable to phone before driving out there. 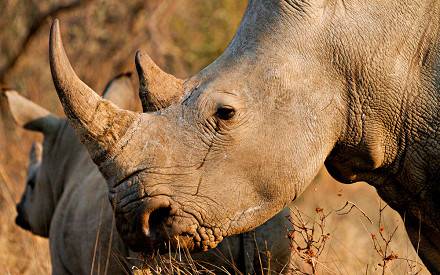