Ngorongoro CA has a mild, temperate climate. The area experiences two Wet seasons. From October to November are the 'short' rains, followed by the 'long rains' from March to May. Rainfall is usually experienced in the form of short showers. The crater never gets very hot during the day, but the crater rim gets cold, and it can freeze at night. Warm clothing for early morning game drives is a necessity.

The Ngorongoro Conservation Area is a vast area with altitude ranging from 1,027 to 3,522m (3,369-11,555ft). Most people only visit the Ngorongoro Crater. They spend the night in a lodge or campsite on the crater rim and visit the crater floor for wildlife viewing. Both the rim (about 2,300m/8,530ft) and floor (about 1,700m/5,577ft) are at higher altitudes and are colder than the overall conservation area. Temperatures drop by about 6.5°C for every 1,000m you climb (or 3.5°F per 1,000ft). The difference is more noticeable during the night. Afternoons on the crater floor will be pleasant, but it can freeze on the crater rim at night. The rim also receives quite a lot of rain. 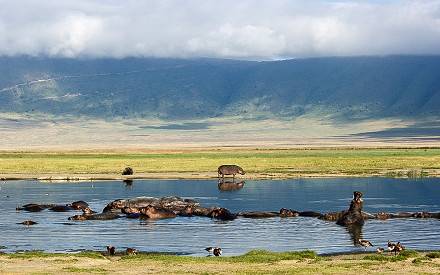