This Tour Is Offered by Mufasa Tours and Travels 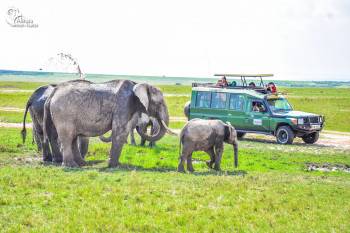 Mufasa Tours and Travels is a Tour company based in Kenya. A team that provides unique and socially responsible Tour packages in Kenya.We major in Safaris for both Budget, mid range and luxury packages ,Beach vocational tours along the coast, City day tours in Nairobi , Hotel bookings, Day expeditions and Car rentals of 4 * 4 tour vehicles and buses.We value clientele requests & offer 24hrs customer service and responses.Our staff are well trained and experienced during tours.Think Travel,Think Mufasa.

We loved our Safari with Mufasa!

We had a more than wonderful time on our safari with Mufasa. When I initially started looking to plan a safari, I reached out to multiple different safari companies. A Mufasa rep responded quickly and sent options at different price points. Mufasa let me pull a couple things from the different price points to work with my budget to create a plan that worked for me.
For the first half of the safari we were visiting the Masai Mara and had a driver named Samuel, we called him Sam. Sam was so friendly and welcoming. He took us all over the Masai Mara and was able to show us 4 of the big 5. We were able to see 11 cheetahs, 5 lions, 1 leopard, 3 rhinos, and tons of giraffes, elephants, birds, etc. The drive from Nairobi to the Masai Mara and back is very long, but Sam made it very enjoyable. By the end of the trip we were singing in the car together. Sam’s English was great, he also spoke Spanish perfectly too. He was very knowledgeable on all the animals and was able to answer all our questions.
The second half of the trip we visited Lake Nakuru and Amboseli with a guide named Charles. Charles was very friendly and knowledgeable of all the animals as well. We were able to see the rhinos which completed the big 5 for us. Charles took us all over and was very patient with us and our many questions. He was very knowledgeable about all the animals and changing terrains. Charles took us out on the last day to see the sunrise in Amboseli which was amazing with Mount Kilimanjaro.
All the lodges and parks were beautiful. We used a land rover for half the trip and a safari van the other half to save money. Both were great for viewing the animals. The different parks and reserves were all so beautiful. My husband and I were more than pleased with how easy and carefree the planning was using Mufasa. We have no complaints. Everything went as planned. My husband and I have traveled a good bit, but this trip was one of the best we have ever done.
Do not miss out on the hot air balloon ride over the Masai Mara if you can afford it. It was like nothing I have ever experienced. The visit to the village of the Masai Tribe was also very interesting and moving- if you can this is an amazing experience as well.

We went on a 4-day safari to Masai Mara and Lake Nakuru with Peter from Mufasa tours and travels.
Whatever questions we had about the animals, traditions or anything else - our guide and driver Peter was able to answer! Also Peter was very helpful to his colleagues that had troubles on the road (not all of them are as good drivers as Peter :) ) and was respectful to animals.
He has huge experience in safaris and it looks like he knows everybody and also knows all animal's favorite places.
Joseph, the contact from the Mufasa, answered all our questions before the safari and helped us a lot!
It was the journey that we will never forget!
Thank you guys!

The best tour ever

I went on a 2 day safari with my mother and sister.
We had a great time.
Joseph our guide and driver was the best, fynny, friendly, had a good sence of humor and he was smart.
We felt very safe with him.
He told us about everything there is to know about the wildlife in Kenya. He was very respectfull around the animals.
All in all it was the perfect tour.

Me and my girlfriend went for a safari in Maasai Mara in February 2020 with Mufasa Tour. We managed to are all the big five!!! Our driver,Anthony, was Always ready to follow the animals in a way that is.not.too much aggressive for them but at the same time cool for us. A smart guy and teach us how ti behave in the savana. We were the ones that spotted the rihno, follow him and than the driver gave the position to the other Cars using the radio. We did 1 and half day, from 16 to 19 the First day and from 6.30 to 16.00 the second One. If you really want to.enjoy the park I suggest you to agreed on the timing in advance ...but for us was perfect! Kirkrok lodge Is the oldes inside the park, luxury but not eccessive . The buffet was delicius and the appartment surrounded by nature. There Is a lake with Hippo and other Animals so that s why you have to be scorted during the night. Super safe!
It Is n Amazing expirience that wveryone once in a Life should do!
Don t think twice and book It now!
Giampaolo

A hassle-free, flexible safari trip that delivered on all fronts.

My partner and I booked with Mufasa after seeing that they did the Nairobi to Mombasa trip over three days which worked out perfectly for our itinerary. From the first email I sent, Joseph's replies were polite, punctual and professional. He happily answered all of our questions and kept us in the loop regarding all stages of our trip. We were pleasantly surprised on several fronts - firstly, that we wouldn't be travelling as part of a group and had the van and guide all to ourselves and secondly that we would be collected from our AirBnB in Nairobi and taken right to the doorstep of our accommodation in Diani. Joe, our safari guide was knowledgable, polite and we really felt like he wanted us to see as much as possible over the three days - even suggesting an earlier start on the last day when we had yet to see a lion (which we then spotted within the hour!). Overall, we had some natural worries before booking the tour which were all summarily dispelled by excellent customer service and a flexible attitude to our other arrangements. Top stuff!

Other Safaris & Tours40  – Offered by Mufasa Tours and Travels