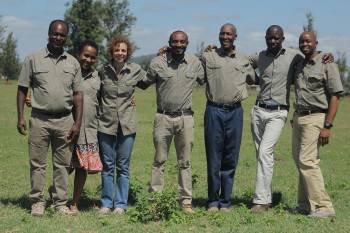 Complete rip off - terrible guide, horrible experience and now they won't respond to or refund us

Before we arrived in the country Safarihub were very attentive, but once we arrived in country the airport pick up was the only thing that met our expectations (or the promises made on their website). I have no idea how they have any good reviews as all the information about their 'fleet' of cars was untrue - we were in an old, noisy, uncomfortable vehicle with another company's logo on it. We also had the worst safari guide I have ever come across. I've been on about 9 safaris now in 5 different countries (including previously in Tanzania) and I have never had such a terrible experience - this guide couldn't even see! I actually think he was losing his sight. He wasn't able to spot any animals. The animals we spotted he scared away by driving fast straight at them. (Ironic as the majority of the time he drove unbelievably slowly so we didn't cover much ground). He had no radio contact with anyone so had no colleagues giving him information on where the leopords etc. were. I was apalled. When I confronted safarihub about it they admitted that he worked for another company (not their driver) and they'd never done any check of whether he was a good guide or not. Despite being very apologetic at first though, Safarihub stopped replying to us and now we are desperately trying to get any of our money back having spent thousands of pounds on a really disappointing safari. This was supposed to be the trip of a lifetime for us, but ended up full of stress and anger because of Safarihub. Steer well clear of these thieves.

5 people found this review helpful. Did you? Yes No
Link to This Review

Find below a point by point analysis:
- Safarihub is a registered tour operator in Tanzania, in order to qualify for a TALA license you require a minimum number of vehicles in your fleet. However since you booked one of our cheaper budget group safaris you were allocated a less superior vehicles from our sister company being a 2011 model Nissan Patrol with a pop up roof and all standard safari accessories. To date you are the first person to find this vehicle uncomfortable.
- Guzzo your first guide is one of the most experienced tour guides in Arusha with a wealth of knowledge and experience, his vision is perfectly fine as all employees require a yearly eye check as per Tanzania law. In the Serengeti there is a speed limit and you can expect him to break the law. He mentioned that you wanted him to go off road to get closer to the animals, again this is not allowed in Tanzania national parks and as he claims this is when you became abusive towards him with some racist slurs involved, not nice at all! Anyway we than sent you another vehicle and driver for the remainder of the trip and again you complained that the driver could not spot animals for you, the national parks in Tanzania are huge and it sometimes takes a combined effort to spot the game, you cannot be fully dependent on the driver - Its not a zoo.
- You are the first client we have come across that has been disappointed with everything on safari from not seeing a leopard to having a bumpy chair.
We do not appreciate the way you mistreated our hard working staff and especially asking them to break the rules in the national park for your pleasure. If you want to go for a luxury experience don't book a budget group Safari and expect wonders. We have a 5 star track record with ABTA and ATOL and we will keep it that way. So no you can not con us for a refund or a free safari as those are you clear intentions.