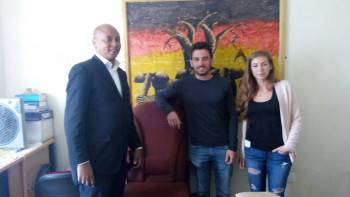 The safari was a success. The program was adhered to. We were very satisfied

Wildebeast 8Days Camping Safari: Our guide Daniel did his job to our satisfaction. We saw a lot and his explanations were always detailed. We also had a good cook in Johannes, who prepared good, clean food for us. If you are looking for a good price-performance ratio with beautiful animal sightings, you cannot avoid Meruslopes.

Was this review helpful? Yes No
Link to This Review
Aleda   –

They change the order of the parks (due to people who took only 3 days safari), that is not so negative thing but tarangire after ngorongoro and serengeti is not surprising. However, The tour is amazing and the place wonderful. We had problem with the jeep but they solve it in a short time.
I m Italian and about food I don't know what to say, It was normal, even pasta was good. I can suggest Eric as chef. Benson is also a nice person and guide.

Was this review helpful? Yes No
Link to This Review
Guillaume Vobauré   –

Everything was ok but the meals. I'm a vegetarian and I've been a bit disappointed with the dishes served.

Was this review helpful? Yes No
Link to This Review
Carlos Mendez   –

I have to admit that despite the misalignment of expectations I saw a lot and I have done a couple of safaris before in other countries.

Meru Slopes is a very good safari provider, just make sure you discuss the details before deciding on a package.

P.D. They offered a quick and good service recovery (discount on a future tour) once they realized that I was not entirely happy with the service they delivered.

Was this review helpful? Yes No
Link to This Review
Tom   –

Communication via mail and whats app. This went very well though its maybe a good idea to use an online paying program in stead of just making a deposit.
Safari itself was well organised. We were picked up from a hotel and brought to the hotel of Meru slopes in Arusha. This hotel was basic but clean.
Next morning we left at 6 am and drove to the first camping site in Serengeti. We did not do safari the first day and that was a disapointing because we thought we would see already animals. Camping site in Serengeti was beautiful but toilets en showers were dirty.
Camping site in Ngorongoro was nog nice. A lot of people, very dirty toilets and showers, very cold at night.
The food during the safari was very good.
We saw the big 5 and the great migration so that is of course the most important and a big succes.
Our guide and chef were very friendly.
The safari car was a bit to old and not so comfortable..
Overall we enjoyed it very much. A very reliable company!

Was this review helpful? Yes No
Link to This Review
Erin   –

Wonderful safari and service for a great price!

I had a wonderful experience with Meru Slopes. Everyone was incredibly responsive, service was great and exactly as described, and it was amazing value for the price. The safari was absolutely amazing, and all of the guides, drivers, and hotel staff were knowledgeable and helpful. I would highly recommend them!

Did the 4 nights / 5 days Manyara / Serengeti / Ngorogoro Crater trip. Excellent value for money including the 2 nights stay in the hotel before and after. Very helpful in assisting in buying bus tickets when we arrived for our departure. Would recommend as very good budget safari. Thank you very much Geoffrey and guys. Happy customers! :-)

Was this review helpful? Yes No
Link to This Review
Marcello   –

Incredible experience and yet good value for money.

This was among my favourite experiences in my life. We saw the big 5 and our own shortlist of nice 5.
Manyara was changed to Tarangire due to seasonal animal migration. We were not disappointed.
Two nights in a 2star hotel were included the night before and after the three day camping. The food is budget, as expected while the driver's professionality and dedication cannot be understated, especially he really knew his car which felt safe due A good camera is a must but don't underestimate the value of a really good binocular. Once you get tired of taking pictures it's great being able to spot actions and rare species from a far. Also bring extra snacks. The trips can be very long. 10-12 hours in the jeeps are standard every day. Some parts are dusty and a mouth balaclava was helpful for our co-travellers. My feedback for the driver is to be clearer with time and schedule. My feedback for the chef is to skip the desert dry carrot sandwiched... and maybe also the bony chickens.

Reliable Company to deal with.

After a look at the different companies we went with MeruSlope Tours. Communication was good and they picked us up from our Hotel, almost at the time agreed. Our Guide was excellent, we were given lots of information while on Safari and we got to see lots of animals. The first campsite we stayed at was good and had decent facilities. The other two were not so great. None of the camp sites had hot water and the facilities were nothing more than space to put up a tent, a toilet and somewhere to eat. We met other travellers later on who said they had gone to the same areas as us but stayed in much better campsites for the same money. The food was adequate considering the facilities available but I am sure it could have been better too. It was said that towels were provided but this was not the case, no biggie for me, I don t like cold shower but I would have brought one if I had known. At the end of the day, it was the animals we came to see and we saw lots of them. If the last two campsites had been a little better then we would have been 100% satisfied.

2 people found this review helpful. Did you? Yes No
Link to This Review
Michal   –

We were very impressed. Communication with the Company was easy and quick. The organization of the whole trip was good. If I have to say what I did not like was that the Company provided tents which were not waterproof, which meants that both nights it was wet from inside. Our Driver could have said more Information about the parks, animals, etc. He actually said just a few things and then he was silent and answered just the questions which we had.
Apart from These things we enjoyed the Safari and would recommend it. It was worth paying the Money.