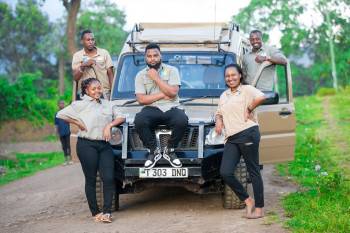 We wish you a very warm welcome! Karibu!

If there was a negative one rating, that is what I would give. All of the accommodations except for Reef and Beach were filthy and smelled terrible. The lunches were packed around 7am every morning and left to sit in the sun on the passenger seat until lunch time. We stayed in Arusha for 3 nights. On the first night, the water kept cutting off . On the second, large ants spread all over the bathroom floor and on the third, there was no hot water in the tent. The agreed -upon payment method was changed last minute. We were initially told that we can pay upon arrival however, about 2 weeks before our departure we were told to pay nearly half the amount.
Each time we had a domestic flight we had to practically beg for the tickets to be sent. Even though when the payment method was changed the excuse was that they needed to book our flights in advance.
On our flight from Arusha to Zanzibar, they sent us one ticket and sent our guide another(different Airline). We were extremely confused. Poor poor management. There is no emergency contact number or personal. We arrived at about 5:30am . It was dark in Zanzibar and our pick up was a bit late . He arrived without a sign , a uniform or anything that indicated that he was from Paradise and Wilderness( not even a sticker on his bus). We quite reluctantly got into the bus and were taken to a hotel in Stone Town. We were told we would have to wait until check in time i.e.2pm. which was completely ridiculous because management had our flight details and knew we would be arriving earlier. I tried contacting them via WhatsApp. When they responded, all they had to say was "Kindly be informed that normally check in is 2pm, if you request early check in is subject to availability and we charge 15 USD per room" (copied from WhatsApp) . We were willing to pay that amount but there weren't any available rooms. We ended up having to wait for an extra 6 hours to get our room (which smelled like bowel). They later apologized and offered a complimentary massage but this was not nearly enough. By the time our Safari was over , we were fed up and we decided to leave early. Our original booking accounted for 3 nights in Reef and Beach but we only stayed for 1(we were not refunded). We arrived at Reef and Beach around 8pm and left at 7:30am which brought our trip to an end. HORRIBLE HOSTING EXPERIENCE