The Skeleton Coast is characterized by heavy fog and a desert climate tempered by cold sea breezes. Early mornings tend to be very misty, but this often clears by mid-morning. Aside from the fog, it is mostly sunny and precipitation is low.

This is the coolest time of the year. Rainfall is practically absent. These winter months experience heavy fog and strong westerly winds, coming off the ocean and cooling things down.

The Wet season falls in the warmer summer months. The fog and cold sea winds usually prevent searing conditions. Although this is the Wet season, rainfall is very low. Early morning temperatures reach about 17°C/63°F. 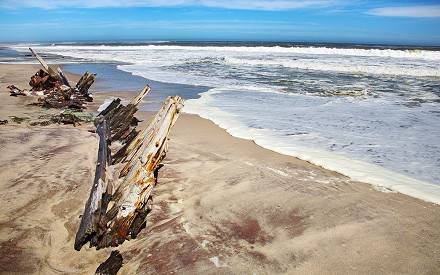