Solio Ranch is more a sanctuary than a game reserve. The small property is totally fenced for big animals. Black and white rhino have been introduced for breeding, and the concentrations of these animals are second to none here. Other wildlife includes zebra, giraffe and buffalo. Antelope species include the stately eland, beisa oryx, waterbuck and impala.

Rhinos are the specialty of the small reserve. White rhinos wander around the grassy plains. Although usually in small family groups of three to four individuals, herds up to 15 can be encountered here. Black rhino, usually very shy, can be seen walking casually in the open as well. Sometimes the two species even hang out together in mixed groups. Predators such as lion, cheetah and leopard are either resident, or pass through regularly.

Solio Lodge is closed in November. Wildlife viewing in Solio is good at any time because of the small size of the closed reserve. Rain can interfere with your game drives, and your general enjoyment of the environment, so the best time for visiting is from July to September and January to March. 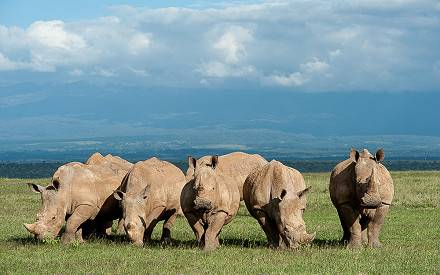