Alan is a renowned Africa expert and has authored many Lonely Planet guidebooks, including the guide to Zambia.

Alan is a renowned Africa expert and has authored many Lonely Planet guidebooks, including the guide to Zambia.

Alan is a renowned Africa expert and authored the Lonely Planet guidebook to Zambia.

Alan has authored the Lonely Planet guide to Zambia.

Liuwa Plain is dominated by its Wet and Dry season and hot climate. Despite there being a notable increase in temperature in October – before the rains, as the park is in the tropics – average temperatures do not vary much throughout the year. However, it gets quite cold at night in the Dry season, from May to October.

There is little rainfall in the Dry season. The days are warm but nights are cold. Warm clothing is essential for chilly, early morning game drives. The plains dry up during the season. Some resident wildlife stays in the area, but a lot of animals move away.

This season is both warm and wet. Showers are the norm and thunderstorms are often spectacular. November is the best wildlife viewing month – this continues into December, but then the park becomes quite inaccessible for game drives. The lodge stays open and offers walking and canoeing activities. Self-drive to the park is restricted. 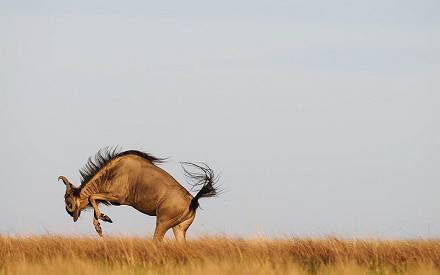