Matobo NP has a good variety of safari animals, although some key species, such as lion and elephant, are absent. Wildlife densities are rather low, and the emphasis of the park lies more in the scenery and cultural activities. White rhino is relatively common and this is one of the best parks in Zimbabwe to see them.

Matobo is prime leopard country, and these agile predators can sometimes be spotted on the rocky outcrops. This terrain is the natural habitat of the rock hyrax, a favorite prey of this big cat. The park is also home to Africa's largest antelope, the eland, and the fastest antelope, the tsessebe. Other antelope to look out for include greater kudu, sable and klipspringer.

The Dry season (from June to October) is the best time for wildlife viewing in the park. Wildlife is easier to spot at that time because vegetation is thinner and animals gather around predictable water sources. However, the park is not a prime wildlife destination, and other activities like fishing, hiking and birding can be enjoyed throughout the year. 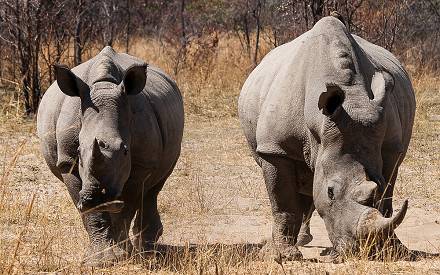