Matusadona offers excellent wildlife viewing of most big safari animals, including the Big Five. Black rhino is present and can be tracked on foot. The lakeshore is excellent for hippo, crocodile and large herds of elephant and buffalo. Kudu, impala and waterbuck are some of the common antelope. Lion, leopard and spotted hyena are present in good numbers.

The clawless otter, one of Africa's more elusive mammals, can sometimes be seen swimming in the lake. Eland, roan and sable antelope inhabit the inaccessible miombo woodland, but may sometimes be spotted toward the end of the Dry season when they come to the lakeshore to drink.

The Dry season (from June to October) is the best time for wildlife viewing in the park. Wildlife is easier to spot because vegetation is thinner and animals gather on the floodplains of Lake Kariba. During the Wet season, from December to March, flooding rivers are a problem and wildife tends to scatter throughout the park. 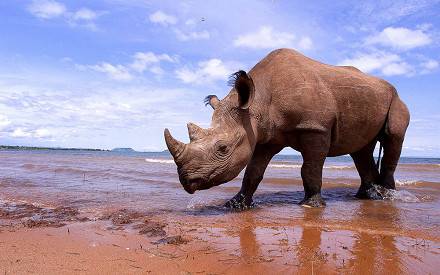