Travel Africa Safari Agency delighted to welcome you to Africa, the home of Safari! The mission of our company is to be your guide in this beautiful land of Tanzania. Our safari company is committed to bringing the best safari experiences to the explorers of Tanzania. Our tours are fully customizable - whatever your booking inquiry may be, And we are here to make your African dreams come true.

Out of this world

If you’re looking for a well organized and high value safari trip look no further. I can’t recommend Travel Africa enough, if I could give 6 stars I would (and I’m pretty stingy with my 5 star ratings). Our safari was an 8 day, mid range, private wildlife safari and cultural excursion. We were traveling with an 11 year old and 13 year old. We came in January which we loved because it was green, cool and not as crowded as the summer months. Mohamed, from my first email, was very responsive and answered all my questions (I had so many questions!). He talked us through all the options and truly made a customized experience for us. He arranged our pick up and drop off (we had a very early departure) and greeted us the first day for a briefing of our trip and made sure to come by the hotel on our last day to send us off.

The quality of your safari has everything to do with your guide and I’m convinced we had the best. You should absolutely request to have Omari as your guide (we took to calling him by his Tanzanian name of Mtanagi). He’s been guiding for 15 years and is really passionate about the animals, birds and history of the land, so he has so much information to offer. Because of his experience he knows so many of the other guides which is really helpful in finding animals. He had a real knack for putting us in the perfect viewing position for all the animals and he has an amazing eye for spotting animals. I actually challenged myself to find a big cat before he did, I did it once and felt pretty proud of myself. Beyond all this, we always felt safe with Mtanagi. He’s a skilled driver, he got us out of tricky spots in mud and was well prepared with all the safety tools and it’s clear he knows how to fix and deal with a safari rig. He’s a dad of 10 so he understood how it is traveling with an 11 and 13 year old. I think what made us really love him was he was present with us, he shared about his life and asked about ours, he ate most of our meals with us (at the hotel it was rare to see guides eating dinner and breakfast with their clients). He treats all people with such kindness and care that it’s impossible not to love him. He took such amazing care of us, it felt really sad to say goodbye.

Our accommodations were top notch. The organization and schedule was seamless but was never so ridged that we couldn’t adjust a little bit along the way. Things ran promptly which I appreciate. The rig was comfortable and roomy and well stocked with water, beer and wine which was a nice perk.

There are so many tour companies and can be daunting in trying to figure out which one to go with. We felt like the value was high for the price and the experience was absolutely unforgettable. Travel Africa comes highly recommended!!

Exactly the right guy for this Job

It was great, and totally worth the money. We got picked up at the airport, got fresh cooked meals everyday on safari, got the best safariguide who knew everything we asked about wildlife.

an excellent choice for a safari in TZ!

First of all, the communication with Mohamed was very easy. He answered any questions quickly and was always available, both per Mail and per WhatsApp.

We were picked up from the Kilimanjaro airport and spent the night before the safari at the Arusha Tourists Inn Hotel (it was included in the safari booking). The hotel was ok. It is situated rather central in Arusha. The room and bathroom were spacy and clean. We could order something to eat at the hotel's restaurant although it was already late and drank a beer before going to sleep.

Next day we were early picked up by Benjamin, who was our guide and driver for the safari. He was very friendly, easy-going and good-humoured.

After we had picked up another 2 couples in Arusha, our safari has started. We drove first to Maniara, where we picked up our chef and all the stuff, what is needed for safari.

After that we drove to the Serengeti National Park. There we spent a night at the camping ground. Next day very early we made a game-drive until midday. We saw plenty of wildebeests and zebras, many hyenas, lions and hippos etc. After lunch at the Camping Site we drove to Ngorongoro. There we spent another night at a camping ground near the Caldera. Next day, again very early we went to the Caldera. It was fascinating to be in an enclosed little world! There we saw also a rhino and of course many other fascinating animals! After lunch at the Camping Site we drove to Maniara, where we spent a night at the Fig Lodge - a nice, clean and cosy hotel. The next morning we went to the Tarangire National Park. There we saw especially many elephants. In the afternoon we were brought back to the Arusha Tourists Inn hotel for the last night before going to Zanzibar.

We would like to thank Mohamed for the excellent safari! It was at any case worth the price we paid! Our driver Benjamin was very competent and also very eager to find so many animals as possible! Unfortunately we didn't see a leopard, but nevertheless the whole safari was just amazing and so much fun! We can hardly recommend Benjamin as a perfect safari guide!

Our tent was good. Actualy, the most exciting thing about camping was a real closeness to the wilderness. During the night some animals, such as zebras even went through the Camping Site! And the stargazing was incredible! The shower at Serengeti camp was a cold one, but it made adventure feeling even more exciting. Our chef was also excellent. He prepared every meal fresh. We had always yummy Pancakes and omelett for breakfast and other food was also very good. We had even a pizza for dinner - don't know how it is possible without an oven.

We are glad to have booked this safari at Mohamed and his Travel Africa Safari Agency. It will be one of our most precious memories!

Our 3 Safari with Travel Africa Safari Agency and 3 time with same good driver Aaron. He drive safety and we saw a lot of animals with him.
Very good food! Was European food and also local .
We come back !

It was an unforgettable time. Mohamed organized an amazing adventure for us.

Mohamed was here when we needed something or had questions about the tour. Benjamin, our tour guide was honestly really amazing. He told us many many things about the wild life and the animals. The jeep was comfortable. The food was so tasty. They really did something here. The campsites were quite good. Even wifi and charger points. We‘ve seen all the big 5!! Benjamin really tried his best. The only bit negative point was the hotel in arusha. It was really noisy in the evening and at night. I would still highly highly recommend this agency and espacially Benjamin.

It’s was our first safari and it’s was an amazing experience. We saw a lot animals (lion, cheetah, leopard, buffle …) Mohamed was very nice, he answer very quickly. The guide was nice as well. The food was very very good! I... 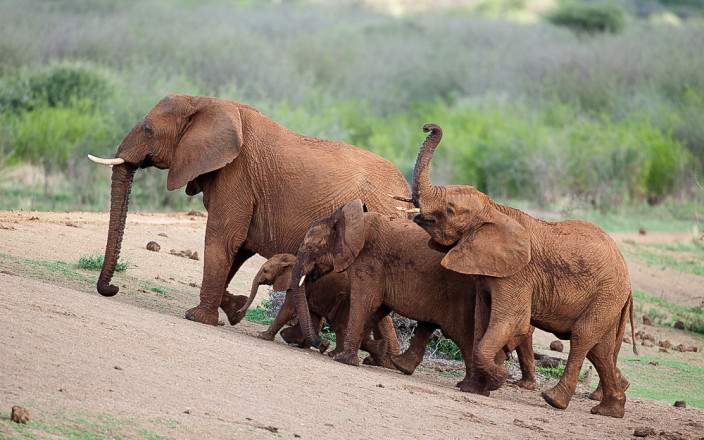