Crater Explorer Tours and Safaris is a fully registered company owned and managed by wildlife and travel enthusiasts. We are a professional company that is well equipped to give you an unforgettable experience on exciting safaris and mountain climbing expeditions throughout East Africa including Tanzania and Zanzibar, Kenya and Uganda. Our company was founded in 2015 and we are a proud member of Tanzania Association of Tour Operators (TATO). Based in Arusha, Tanzania, our experienced team has specialised in customising exciting itineraries with multiple destinations, exhilarating safari adventures and unique accommodations ranging from camping to luxury lodges. All to tailor a vacation that suits your lifestyle and budget. If you wish, we also arrange hotel bookings and domestic transfers by air, boat and land. We are proud to say that we always maintain to provide a high level of service and value fast-paced communication. It is important to us that our guests feel in good hands. We are passionate about Africa and believe that our diverse cultures, landscapes, and wildlife are our greatest assets. Therefore, it is important for us to offer responsible and sustainable tourism. We endeavour to introduce our clients to the natural wonders and beauty of Africa as well as more obvious tourist attractions.

Great tour with knowledgeable and friendly driver and good cook.

I was looking for a tour to book so i reached out to a few companies. Emmanuel was quick to respond to me and called me to provide me the details of what I was interested in. He was answering every single question i had on Whatsapp. I did the Lodge option for 4 days which i would highly recommend over the camping option if camping outside is not for you.
Emmanuel really provided me the itinerary of the trip with all the lodges that I would be staying at. The driver Joseph was AMAZING, he made sure that we saw as much as we could, he has an amazing eyesight and could spot animals from a long distance and take us there. We also had a cook accompanying us (Nathan) and I was extremely satisfied on the quality of food he was able to make, especially in the middle of nowhere. We always had some salad, main dishes and fruits or desert. Nathan always made quality and tasty food. The safari experience was something of a lifetime we saw all big 5 and much more. Ngorongoro felt like heaven especially with the sunrise. I would never forget this and would recommend to friends.

I LOVE SERENGETI. Thanks so much to Crater Explorer Tours for getting us set up with such a great safari. They were really flexible and accommodating for our trip and made sure we were able to see the parks after Kilimanjaro. Saw all the big 5 and also determined my own Ugly 5 haha. Our driver was really patient and knowledgeable about all our animal questions. Would recommend Crater Explorers and working with Emmanuel for anyone looking to explore Tanzania!

We did a camping tour and it was so awesome actually sleeping in the midst of these parks. I felt safe but also a part of the action. We saw giraffe pass by our tents as the sun set! Food was delish, there was always hot water for coffee, and we got surprise wine to share over dinner! 10/10

Fantastic experience. That was once in a lifetime experience. I have had a lodge safari and the lodges were amazing.

It was very beautiful

It was very nice, everything was very well organized. Food was very tasty and fresh. Praise to our driver Frank and cook Manuel. Saw Big 5 and much more.

Firstly, I booked this safari for early January 2022, but had to reschedule for COVID-related reasons. Emanuel was very accommodating and got me into a group for the same safari in late February, on the exact day I needed in order to fit the excursion into my new itinerary. Secondly, while the seven of us (two couples and three solo travellers) participating in this trek had all originally booked with different safari organizers (I with Crater Explorer), and I don’t know if we were put together by design or by chance, but it was a fantastic bunch; we had almost ceaseless conversations and laughs through the long drives and over meals.

Also part of our group was George, the amazing driver and guide we were assigned to. Not only did he know the name and facts about every animal we saw, he was an affable guy, as well as very adept at getting a land cruiser out of a muddy rut! And, while which animals one sees is a matter of chance, George also tried his best to seek out as many as he could. In the end, we viewed cheetah, African buffalo, yellow baboons, black rhinoceros, African leopard, Giraffe, lions, African bush elephants, spotted hyena, jackals, Thomson’s gazelles, bat eared fox, hippopotamus, cape hare, Grant’s zebra, masai ostriches, marabou stork, secretarybirds, kori bustards, crowned cranes, superb starling, African sacred ibis, lesser flamingoes, helmeted guineafowl, and probably others I’m forgetting. Each of us had a seat by a window and the pop-up roof was open often.

Camping in Serengeti National Park and on the rim of Ngorongoro Crater is an unmatchable experience. I wasn’t particularly pleased to find I had to share a tent with one of the other solo guys in the group. But, it was tolerable for two nights. The food was what one would expect on a camping trip.

All-in-all I’m really pleased I embarked on this safari. 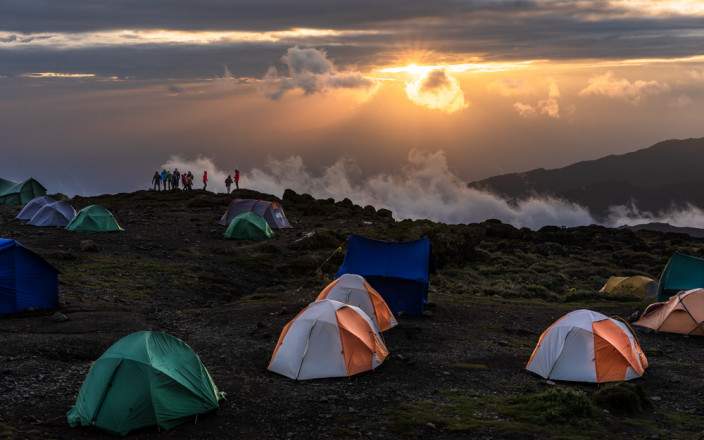