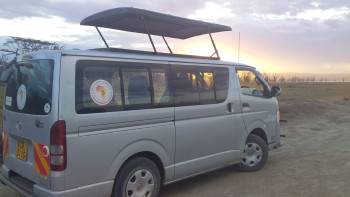 Back of Africa Adventure

Back of Africa Adventure Request a Quote ›

Not what I expected

In this safari business as in many others in Tanzania, it seems that you are buying from some company in particular but then they just put you with the same budget pack that many others offer. We booked everything through Back of Africa but once we arrived to the office, Allan, whom I have been all the time in contact, was not there, there was no signs or credentials or anything that would refer to Back of Africa. We trusted the guy at the reception, his name sounded like "Biarman". So we paid the big amount of money for the safari to him and we didn't even get a receipt. The same guy at the reception was our guide and driver the whole trip. The first day of safari was terrible, the guy was very lazy, not even going out of the car to show us the birds when we stopped at a viewpoint. He could not recognize birds more specificly than the basic information if it was e.g. "a hawk". We didn't have the promised binoculars for each neither the guides, not even one for the whole group of 5 people. Then I contacted Allan try to get some clear info about who is the guide we have and for whom does he work. Allan didn't even know the guy, afterwards he said he was new in the company. But the funny thing is that when we asked to Biarman he said that he works for Sandland Tours, the same company as the logo there was in the safari car. There was 1 person in our group that had booked the safari through a completely different company. We never got this thing clear. And it seems a common practice to put people that has booked through different companies together in the same safari. I think that only in Arusha there was something like 280 different companies, but at the end, many of them belong to the same owner, or they just change the name when the company lose its reputation or whatever, but you can never trust that the company you are booking with, will be the same you are actually going with.

(By the way, Sandland Tours has the worst reviews ever on the Internet...)

Anyways, we tried to make the best out of what we had, we put some pressure to the guide to make a bit bigger effort to find the animals, and it improved, at the end of the day we saw pretty much. I don't think he was a bad guide, but he was not a very good one either. He was just doing his job to get paid, he did not enjoy his job, he was not a nature lover.

The first day we did not have any binoculars, after the second day, we had 1 for 5 people and it was broken and not very good quality. I think it is essential to have good binocular for a safari, and they promised 1 for each, which never happened. We never got any wildlife guide or book.

The camping sites were what they were, don't expect too much, but it was good enough. Our tent was the oldest in the camp and it didn't smell nice. Thank god we brought our own sleeping bags cause theirs were pretty smelly too. We had the poorest chairs to sit during meals, and no chairs at all to be able to relax in the camp site, but the guide had his own nice chair to relax. In some camps there are no lights so they could have adviced to bring own headlamps (we had ours, but other people did not). In one of the camps there was no electricity, so for people without power banks it was a serious problem if you couldn't charge the camera.

There was 2 days that we had to take the cook with us, which make the car not big enough. The cook sat on the front with the driver so we had to share the 4 windows seats on the back with 5 people, while in the national park, seeing the animals. Specially in Serengueti it becomes extremely dusty, it would not have been a big job to cover the bags on the trunk so they wouldn't be completely brown from the dust by the time we reached the camp.

The safari of 5 days in the 4 main national parks in the North of Tanzania was still worth it for the own awesomeness of the places, but certainly not because of the company we booked with, whatever that company was...

Reply from Back of Africa Adventure

Dear Elisabet,
I would like to personally apologize for the series of unfortunate incidences that you experienced during your safari on the Tanzania side with us. We continually try to do our very best for all of our guests, but unfortunately, sometimes we do fail. I therefore again express my sincere apology on behalf of our company. I am very sorry to learn that your experience with our Arusha representatives, was less than adequate.

I understand your frustrations and the moment you did reach me out on my Kenyan cell phone on the issue; I tried all I could in my powers to sort it out and my contact person in Arusha promised to rectify the mistake as I did communicate back to you the same day. Little did I know that my directives landed on his “deaf ears” until I read from you via this respected platform. I MUST say that we let you down as a company and as a person whom you were communicating with all through and for that, I am so sorry.

As a company we take full responsibility for the situation and understand why leaving the work to the “untrusted hands” at times compromises our standards and I did not meet your expectations. Our Customer Service Representatives are given a set of guidelines that they are supposed to adhere to, however in this case, clearly those standards were insufficient.

In this regard, we failed you as our valued customer. I should have postponed my travel and see you off on your safari program with a more qualified and respectful guide.

Please be assured that this type of situation will never happen again. We have put new procedures in place as of today that will ensure that any of our customers who will be with us on a safari and may intend to speak with someone more senior, for any reason while on safari or after the completion of the trip and need assistance, will be transferred immediately at our company expenses.

It's very important to us that our customers get what we promised as that is what our company motto “putting customers first through service…” does preach.

I regret that we provided you with bad service and a poor customer experience—it is the exact opposite of what we pride ourselves on. We value our customers and understand how important it is to offer exceptional service.
I would like to thank you for bringing this to our attention. It will help us improve our operations and services today and tomorrow across the globe.

If there are any other issues that need to be addressed, now or in the future, please don't hesitate to contact me personally on my cell phone or my Gmail account.
Yours Sincerely,
Allan.