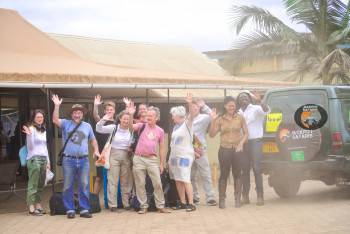 our staff at jackpot office in arusha

It was not a Jackpot that's for sure

I have to say the experience that my friend and I had with Jackpot Safaris was not great. Andrew (the owner of the company) is very warm and friendly until he's got your business. After that he becomes a lot more awkward and doesn't really want to listen to what you want to to as much.

I did a 3 day safari of Tarangerie, Lake Manyara and Ngorongora. We asked to leave nice and early at 7 as spending only 1 day in Tarangerie we wanted to maximise the amount of time spent there. Andrew refused point blank and said we'll get picked up at 9. On the day of the safari - the truck was over 45 minutes late. When the truck arrived it was noticeable one of the oldest Safari Trucks and the inside was not very comfortable. Despite being 45 minutes late one of the first thing the guide said to me was how because he was freelance he gets paid less than other guides so tips are quite important for them. This was not a particularly great start.

When we got to Tarangerie, when we went inside the park he said to me and my friend that he din't have binoculars in the car (which was a big disappointment). Furthermore he didn't seem that enthusiastic about looking out for animals and the impression I got was that he was going to mainly do driving and not strain his eyes too much looking for animals. I have done a safari in Tanzania before and our guide as well as being a lot more enthusiastic, said he'll keep his eyes peeled for us so I do have a bit of a precedent on what to expect and it did not deliver. Also going round the park there was clearly a problem with the radiator on the car as he kept having to stop and top it up (which no other cars were doing). Also I think we were only in the park for around 4 and a half hours.

The camp site that we stayed at was very nice and even had beds in the tent. So what I was abit confused about was after we paid for the safari Andrew asked us if we had tents to take with us to which he said we didn't. He then said ok. Naturally when we got to the campsite we couldn't help but wonder as to why we were asked to bring our own tents if there were tents provided that came with beds. Based on the impression of Andrew I had gotten, my thoughts were that he wanted us to bring our own tents so it would be cheaper for him (but that saving would not have been passed on). I can not say for definite whether that is the case or not but that is my theory. Also another suggestion - say you don't eat fish - it's not a great idea!! The soup was very nice but the main meals were not nearly as good as the ones I'd had previously on safari in Tanzania.

After our late start going to Tarangerie we asked to leave early the next day to go to Lake Manyara. Our guide said there's no point as you can drive round Manyara in 3 hours. Well maybe you can drive round in 3 hours. But my friend and I had not been to Manyara before so we didn't want to just quickly drive round and only spend a few hours there. We wanted to take the time to enjoy the scenery and the animals. Again I think we only spent around 4 and a half hours there.

That evening he said we'll be leaving early the next day to go the Ngorongora. I was quite excited as I thought that this meant we'd be spending longer in the crater. However in reality the only reason we were leaving early was because he wanted to get back earlier so we were not spending any more time there. This was one of several occasions on the safari where I felt the guide just wanted to get things done as quickly as he could. He was not very enthusiastic.

Despite leaving the crater early (not long after 1 which was a bit early for my liking) it took an extra hour and abit to get back as the engine was overheating we had to stop for a long time to let it cool down and for the guide to put more water in. Andrew you may need to invest in a new truck.