The climate in Serengeti is usually moderate and pleasant. It never gets very hot, but it is consistently cool to cold at night and in the early mornings. Don't forget to take warm clothing.

Serengeti's Dry season is from June to October. There are two Wet seasons. The 'short rains' are from November to December, and the 'long rains' are from March to May. During the Wet season, it rarely rains all day, but afternoon thundershowers can be expected.

Afternoon temperatures are usually around 25°C/77°F. Most days have a fine, clear sky. It gets cold at night with minimum temperatures around 14°C/57°F. 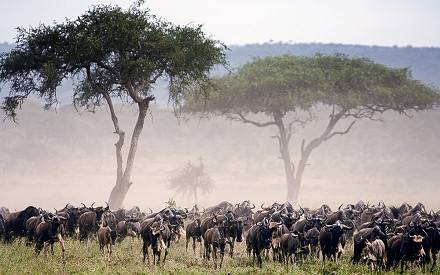