The Serengeti is considered Tanzania's best park. Big herds of buffalo, smaller groups of elephant and giraffe, and many antelope, such as eland, topi, kongoni and impala are resident at any time of the year. All three big cats are easily seen. Lion are often found on a kill. Cheetah are very common on the southeastern plains, while leopard can typically be found lazing in one of the big trees along the Seronera River.

The Serengeti is famed for its annual wildebeest migration, when some 8 million hooves cross the open plains, as more than 1,500,000 wildebeest, 200,000 zebra and 300,000 Thomson's gazelle join the trek for fresh grazing. Predators follow the migration and sightings of big cats hunting is particularly exciting. Spotted hyena, golden and black-backed jackal are never far off either.

The Serengeti offers amazing wildlife viewing throughout the year. June and July are the best months for seeing the migration and a possible crossing of the Grumeti River. The more famous river crossings of the Mara River can be witnessed around September in the north of the park. February is the best month for the wildebeest calving. The dry months from June to October offer the best general wildlife viewing. 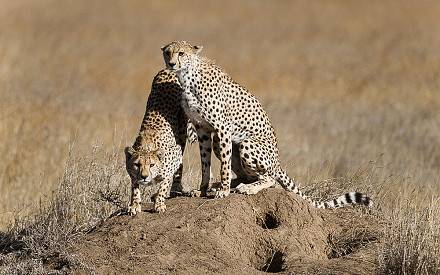