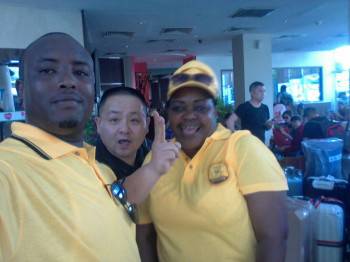 We will show you Tanzania Better than Anyone else

Never in my life have I written a negative review, so I honestly feel bad about this post. However, if I were a potential customer of Tanzania Mwangaza Safari, I would want to know this information.

I was volunteering at a hospital in Dar es Salaam for a few weeks and decided to splurge on a safari at the end of my trip. I chose this safari company because they were affordable ($1450 USD) and offered a 4 day/ 3 night trip that fit my time constraints. The communication and payments prior to the trip were excellent. Turns out that nobody else signed up for this particular trip so it ended up being just myself and the driver.
Day 1 - Departed right on time and the day went completely as expected on route to Selous. We did get delayed for 1.5 hour behind multiple trucks stuck in the mud and blocking the road, but that just goes with the territory of travel. Went on an evening boat trip with another group, with a French speaking guide, but he was nice enough to offer some info in English to me.
Day 2 - Driver showed up 1 hour late then had me wait while he went to the restaurant and ate breakfast. We then drove to Selous entrance gate where we waited another 1.5 hour for him to locate a guide for the day. I watched in envy as dozens of others tourists arrived in plane and jeep and went on safari while we sat on the side of the road waiting for the guide to arrive from the neighboring village. I just chalked it up to inconveniences associated with a budget minded safari. Other than that, it was a great day in the park with many animals seen.
Day 3 - Driver showed up 1 hour late again. The day was supposed to be a sort of game drive on our way through Selous park on our way to an afternoon game drive in Mikumi park. The driver told me he needed to drive quickly so he would not incur additional park fees. As a result, absolutely zero wildlife viewing happened as we drove at 70 kph through Selous. I thought the vehicle might completely come apart as we sped along the rough roads. We ended up with three flat tires we throughout that day. The spare tire and jack were not suited for the fixes so the driver and I spent hours that day collecting stones in the brush, crawling in the mud under the jeep to precariously prop up the vehicle, and stopping at a roadside tire shop. I am amazed that one of us did not get seriously injured they way we were forced to rig the jeep for the tire changes as the jack and stones repeatedly did not hold thus dropping the vehicle violently back to the ground. It took us 14.5 hours to make it to Mikumi that day so our planned afternoon safari definitely did not take place. It is a budget trip and all part of the adventure, right?
Day 4 - We made plans to go on a half day game drive in Mikumi prior to our drive back to Dar. Unfortunately, the driver showed up 2 hours late that day and was unreachable by phone. Mikumi was beautiful , but we only had two hours in the park before we had to make the 8.5 hr (normally much quicker, but we had to drive slowly because of the tires) trip back to the city.

I realize I am incredibly fortunate just to have the opportunity to go on safari in Tanzania. Perhaps my expectations were far too high for a budget safari. Looking at their current reviews, it appears I am one of the only customers to have a less than optimal experience with Mwangaza so take this negative review with a grain of salt. However, when I look back and realize we spent 31 hours driving, 8 hours waiting for the driver and fixing flat tires for only 8 hours of actual safari related time, I feel this trip was far from worthwhile in terms of time and cost.

In summary, even though the people at Mwangaza were very nice, I personally had a very poor experience with them.

2 people found this review helpful. Did you? Yes No
Link to This Review