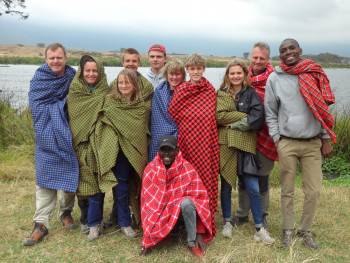 Change in itinerary, no communication maintained, overall a bad time

Communicated that pick up will be 07:45 am but the driver appeared at 6:30 and was insisting to join immediately as some other people are waiting. On the way after asking the driver I came to know the itinerary is completely changed and Jimmy didn't inform anything. Picked up from my hotel dropped at another hotel. Picked up by another driver and dropped to a camp in Manyara where I had no itinerary to go. After waiting for 2 hours picked up by the actual safari vehicle at 11 am and drove to Serengeti while the original itinerary was Tarangire for the first day and next day early morning start for Serengeti. The whole day gone driving to Serengeti and reached at 7 pm. No game drive on the first day and lost the whole day in travelling.
They didn't inform that the tents to be pitched by ourselves. Had to do that in the rain at night!
After Serengeti & Ngorongoro, no information received who will pick up and which camp as this group had the last day on Safari.
Finally was dropped to a camp near Manyara. The camp was fantastic, the first time in 3 days was feeling well in Tanzania.
Last day the driver was supposed to pick up at 7:30 am and the driver arrived at 9:30. As I had the flight scheduled at 19:40 from Kilimanjaro airport, one driver was supposed to pick up at the park gate so that others in the group can continue with the safari. No driver arrived. The safari had to end early for others also and drove on the way to Arusha. On the way petrol ran out and the driver was complaining that the safari company didn't pay full amount to fill petrol. Somehow he arranged petrol on a highway garage.
After a drive I meet the driver who is supposed to drop me to Arusha. The driver was driving the car as if its a bullock cart and he was so scared of driving in traffic.
I insisted that I am dropped in the taxi stand for taking a taxi negotiated with good rate for Kilimanjaro airport. I was informed one driver is waiting at Arusha to drop me to the airport and I was in an impression that the drop off could be complementary for making my life so bad for last 4 days! :) The driver dropped me and asked the full amount 40 USD. I could have easily take a taxi from the taxi stand with less fare if I was dropped there and in time!
Overall what is experienced is they are very bad at communication and tour management and do not care about client satisfaction. Although most of the people are good at heart and very simple. They need to improve communication & management.

1 person found this review helpful. Did you? Yes No
Link to This Review

By the way Lok the sharing safari can start with any destination but all destination or parks listed on the confirmed list of itinerary MUST BE VISITED, so the group you join was already departed in a day before and it was already in Manyara thsu why we transferred you to Manyara to the meeting point where the group was located at the time being. But you visited all 4 parks and no park was scaped...hope you can confirm this.

The ‘guide’ Philemon really let it down

Communication with Jimmy before the trip was good. We paid a 50% deposit, and the rest the morning of the trip. The best thing about the trip is the price as it was much cheaper than almost all others. I suppose in this case, we got what we paid for. Pick up was well on time and journey was smooth. However, when we arrived, we were put with another group (which we expected) but with another guide called Philemon, which we had not been told about beforehand. We believed we would have Jimmy as our guide as that’s who we’d done our research on, but he didn’t even tell us he wouldn’t be the one taking us. This was really disappointing. It would have been ok if Philemon was a better guide. From the start he told us how much to tip him and the chef, which is a big no and far far too much. He was disinterested in us for the rest of the trip, and was purely a driver, telling us nothing about the animals as we went around. The bottom line is - if you go on safari to the Serengeti/Ngorongoro crater, you will have an amazing time. There are so many animals, and we saw everything up close including lions elephants zebras giraffes gazelles a leopard, birds, hippos wilder beast cheetahs and warthogs. we didn’t see a rhino up close but did as a tiny spot from the viewpoint at the end. However, if you want a guided and attentive tour, this is not the tour for you. Philemon would stop when necessary for most of the trip to let you view the animals, and particularly when other jeeps stopped, but as the trip went on, he got impatient and drove far too fast to see things and wouldn’t stop for animals. This was particularly on the last day, when I was actually shouting at him to stop so we could see what I believed to be elephants in the jungle part of the Ngorongoro crater on our last drive, and he heard me and refused to stop and dangerously went even faster right out of the crater til the end. This was so disappointing to miss the final animals and completely unacceptable as a safari guide. We were all so shocked. One of them might’ve even been a rhino but we’ll never know as he didn’t give us a chance to find out which felt a bit like we’d been robbed of an opportunity. An elephant walking around our campsite right up close when we got back made up for this, but I felt very let down. To top it off, we had asked jimmy to arrange us a lift back to the airport from Arusha, and the driver knew nothing about it so we had to get another. The chef didn’t even say goodbye after he left and we’d tipped him. The animals were amazing, food was pretty good and we saw incredible things, therefore we still had an amazing time. However, this was definitely not down to the ‘guide’ Philemon. The car had also lost suspension on one side which my boyfriend noticed and the driver admitted and had to keep checking which is really quite dangerous. The highlight was being able to get out at a hippo lake and see amazing hippos right up close. Because it was so cheap and the animals were amazing , this deserves 3 stars.

Was this review helpful? Yes No
Link to This Review
Fiona   –

Poor communication but ended up with an amazing experience.

Communication started off good early into the planning of the safari but ended up poor. After a while the responses i was getting were vague. What really annoyed me was when i was told that once i got to my hotel in arusha the night before safari someone would be waiting at the hotel to collect the remainder of money that needed to be paid and an intinerary of the next day would be given. Arrived at the hotel with no one from the tour operators to give any information. Spent half an hour trying to get through to them to get some information with no answer. Eventually they called the hotel back to give us our pick up time and no apology or explanation of why they were not there when they said they would be. If your gonna say your going to do this then i would expect this to be done. Other then that we had exceptional service due to our tour guide Oscar. Great guy who provided us with a great knowledge of the all the animals and history of the serengetti. Overall i was happy with service that was provided but the lack of communication was rather annoying.

Was this review helpful? Yes No
Link to This Review
viachaslau   –

But the animals was not many

Over 4 days our group (6 people) visited 3 national parks of Tanzania: Serengeti, Ngorongoro, Tarangire. I spent the night at the Lodge, and others in tents. I recommend to spend the night at the Lodge is slightly more expensive, but very convenient. More just like Ngorongoro. Tarangire is between Ngorongoro and the Serengeti. In Tarangire a lot of elephants. In the Serengeti the animals were not much. 4 day Safari for me was worth 900$. It is expensive. The driver was not very good: the road was driving not very confident, Not always stayed near the animals, he said himself the amount that I should give tips for him. Couldn't care less about tourists. The food was good. The accommodation was good. But a whole tour like 4. But the animals was not many.

1 person found this review helpful. Did you? Yes No
Link to This Review

But Tony remember when you arrived you refused to pay that $ 40 and we charged you only $ 20 , because it was a fault of intermediary bank which charged that as bank transfer fee, we were not the one who deducted that .