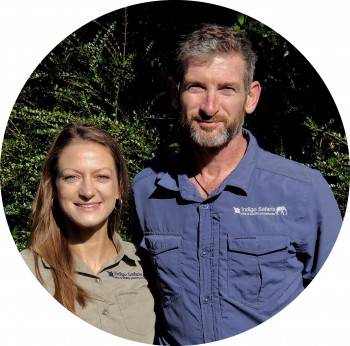 Slow and rude to respond, then failed to organise the few things left to him

Indigo safaris were sometimes slow to respond. The scanned documentation provided failed to give enough information, which also led to some confusion, for example exactly which side of Victoria Falls we were visiting. There was also a breakdown of communication between Indigo Safaris and the 3rd party safari provider in Kasane which resulted in us waiting from 6 am until 7:30 am to go on safari.

We had asked for a game drive as early as possible, as this is the ideal time to see birds. Along with an evening boat trip - also ideal as you get to see an amazing sunset. What was arranged was a mid morning boat trip, followed by a game drive starting at 1:30pm, i.e. the heat of the day. When I pushed back about this, I was told via email:

"All that has happened is that they have been switched round as Kalahari Tours have put their scheduled game drives on in the afternoon and boat cruises in the morning as they that gives better results."

When I said this was not what we wanted, or paid for, and gave good reasons, I was then told:

"I can ask to move the boat safari earlier, but doubt it will be much earlier.

The afternoon game drive in Chobe is a group activity, as you know, and the focus is going to be on animals and they love to go to the river to drink when it’s hot."

I then pushed harder, with an emphasis on how I felt we would see more first thing. The trip was then changed to what we wanted. Albeit on the day the change had not made it to the schedule, hence standing around for an hour and a half. Plus Christopher continued to argue the case for midday safaris. Perhaps he should put that as a unique feature of his safaris!

I'm not sure what Sean considers slow, but in the course of our exchanges, spanning 70 emails received and several phone calls covering numerous itinerary options not only Botswana with quotes for 2 and 4 travellers, considerable advice about seasonality, lodges, transport etc, but also Mozambique and Papua New Guinea, rearranging the itinerary booked with six local service providers when Sean booked his international flights home on the wrong day, and then switching back to the original plan when the flight problem was fixed, I mostly replied on the same day, sometimes immediately.
When exchanges are immediate and multiple, like in a conversation, I confess I do not start every email with a salutation.
Regarding the change in the activities in Chobe, these were made by the service provider, and changed back to Sean's preference as soon as possible. He alerted me to his preference for the schedule on a Thursday evening, the Friday being a public holiday in Botswana, and the switch back was effective on the Monday morning. The local provider unfortunately and uncharacteristically did not enter the change in their schedule, for which i apologised to Sean, despite his initial defamatory and untrue review, the title of which remains unchanged.
As a side note, the game viewing of mammals along Chobe riverfront is excellent throughout the day, including at midday, and also conveniently fit with early morning and afternoon boat safaris, for those who don't want to wait four or five hours between the two activities. The light isn't the best for photography, but there is plenty to see. There are also full-day game drives along the riverfront and visitors can experience the difference in behaviour and light. If they were no good, they wouldn't be offered.
Sean's documentation (not scanned, but a PDF created for him) listed a transfer to Victoria Falls (in Zimbabwe), as per his request, after he had been quoted for transfers to Victoria Falls, Zimbabwe or Livingstone, Zambia, and after a considerable discussion on the phone on the merits of both locations. I really don't think I could have made it any clearer that the town of Victoria Falls is in Zimbabwe, not Zambia.

Indigo isn't making trips to Namibia by themselves

I've found the nice reviews of Indigo Safaris looking for a trip to Namibia. To my enquiry about the price for "6-DAY SAFARI & DESERT EXPERIENCE - GROUP ACCOMMODATED" with additional 2 nights pre- and post tour and airport transfer I got 21900 NAD. Only after asking isn't it the tour that costs "from 15720 NAD" (according to indigosafaris.com) we ended with 17800 NAD with additional percentage for paying by card and for conversion to EUR. We corresponded quite long and a had a feeling that something not said. Only after asking direct about the group size, Corinne Bly whom I communicated with, wrote it was not a trip of Indigo Safaris. The tour was good, the guide - perfect, but decide yourself if there's sense to pay commissions for a dealer, - or just look for Chameleon Safaris (or anybody else) when going to Namibia... And it's recommended to ask about the max group size and max places in the vehicle (we were 8 what was optimum, - for the maximal group of 12 the vehicle wouldn't be convenient)

Hi Zivile, thank you for booking with us and leaving a review. Let me deal with your points.

The 15720 price was the rate that ended 31 March 2019, and was still current when you made your enquiry, but you booked a tour departing after that date, hence the difference in price. Most tours have seasonal rates. Hence the 17800 rate for the standard tour after 1 April 2019 is the correct price, and understandably adding extra nights and services increases the cost.

By booking through us, you get a range of different locally operated tours to choose from, all trusted partners, with the safety of booking through an international travel specialist. On top of that we can offer a range of extensions and combinations that local partners do not, with completely impartial advice, all combined into one invoice, saving our clients the trouble and cost of making multiple international payments as we can take payment in a range of currencies (USD, GBP, AUD, EUR, ZAR) all at no cost if you pay by bank transfer to one of the currency accounts above. If you choose to pay by card though the secure third party portal we use, the cost varies from 1.4 to 2.9% depending on the currency chosen and the domicile of your card.
Unlike banks and credit card companies, we do not charge a conversion fee or a foreign transaction fee (typically 3%). The rate we use is the rate we buy the foriegn currency at, which is about 1.5% off the mid-market or interbank exchange rate on xe.com, that no bank actually gives, and is generally better by 1.5 to 2% than most high street banks. So our clients get the best exchange rate possible, and if they bank in one of the currencies above, typically they have no bank transfer fee to pay.
Nothing is ever "not said". If you ask about group size for example, we tell you. It is even stated quite clearly in the itinerary on this website. As you wrote here, you asked about the group size she told you. When clients book they all recieve the name and contact details of our partner in-country, as you did. I'm sorry you feel that somehow being given all the information you asked fo
and being given a choice of cost-effective payment methods downgraded the experience you describe as having a perfect guide and an optimum sized group to. 3 out of 5.
Christopher Bartlett, Managing Director, Indigo Safaris.