Nyerere National Park (formerly Selous Game Reserve) offers very good wildlife viewing, in general. The string of lakes along the main circuit is a good place to see unusually large groups of giraffe alongside other ungulates (animals with hooves) such as buffalo, waterbuck, impala and zebra. Opportunistic, hungry lion are often found near these waterholes, and seeing a kill here isn't unusual.

Nyerere NP is home to several unusual antelope species such as the majestic sable and puku, a localized wetland special. Black rhino is rare but can sometimes be tracked down in some remote areas. Wild dog are present in the park and can be spotted when they are denning in the area accessible to tourists.

The Dry season, from June to October, is the best time for wildlife viewing in the park. Wildlife is easier to spot because vegetation is thinner and animals gather around the Rufiji river and the lakes. Roads become impassable after heavy rain, and most camps close towards the end of the Wet season, in April, and reopen late May or the beginning of June. The best chance to see wild dog is during their denning season, from June to August. 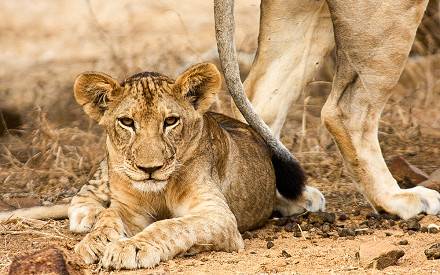