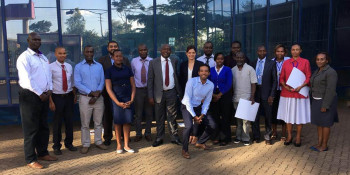 The experience was magical, from the beginning to the end. Raymond, our guide was incredibly special with us, always going the extra mile to try and show us every corner of the Masai Mara and Naruku Lake. He was kind with the animals and the environment, with a lot of knowledge and did not double a second to share it with us. REALLY RECOMMENDED. If you have the opportunity to choose Raymond, you will never regret. THANK YOU!

Was this review helpful? Yes No
Link to This Review
Devina schmitz   –

We were so lucky to have Raymond as our guide, he is a Great person and a Super driver. He made possible that we saw the big 5. Every time we saw an animal he tried to get as nearest possible for us to enjoy the view and see the animals. I hope some day we can come back to enjoy another Game drive with him. 1000000% recommended.
Ask for Raymond. It was amazing with him

Raimond has made my experience unforgetable, I feel so lucky to have had him as our driver , he has made us all feel safe at all times. This experience wouldn’t have been the same without him, it has been amazingly fun and he did his best and more for our experience to be unforgettable. I would recommend this experience and this company 1000000% !! BEST DRIVER EVER!!
Without a doubt I would choose him again!!

Was this review helpful? Yes No
Link to This Review
victor pulido   –

Its a increible experience, i recomend for all!!

Raymond its a nice driver but a bettet person, we enjoy all of travel with this, i hope one day i see him again one day! For us its the best conductor and guie of the world!!!

Was this review helpful? Yes No
Link to This Review
Areum   –

My Husband has been on many safaris and told me that this was his best experience.
Thanks to Mr. Arony my first Safari became the most magical moment for our honeymoon experience!
He is very knowlegable and in one day saw most all the animals including big five!

He is a humorous and most excellent guide and I highly recommend his wisdom! You can never go wrong with him!

Thank you Mr. Arony !
it was a magical moment!

Was this review helpful? Yes No
Link to This Review
Vera   –

We have been on a 3 days Masai Mara Trip with Aruni and it was completely perfect.
Everything was perfectly arranged! The trip was comfortable, the guide was amazing and the animals exciting.
I loved it and would highly recommend it!

Was this review helpful? Yes No
Link to This Review
Michael Summer   –

Aruni is an amazing guy who made our trip perfect

Aruni is a safe and good driver. The was always very kind and made the safari special. He gave us a lot of interesting information and fit the trip individual for us.

Thanks Aruni, we will always remember the mara!

Was this review helpful? Yes No
Link to This Review
Don   –

Arony the SUPER guide! He goes above expectations! Our Honeymoon ended with a Magical experience!

People may search for luxurious and expensive tours, BUT as a person who grew up in Kenya I can confidently say that Karibu safaris is all you need.
I highly recommend our super guide "ARONY"! He is very passionate about his responsibility as a guide who is very knowledgeable and educated us about each and every animals we saw on the safari.
Thanks to his huge network with others, in a one day safari, we saw the whole big five except sadly the rhino.
Arony knows what you need and his passion will not fail you! Once I am back I will recommend Karibu safaris~ ESPECIALLY ARONY!
Thank you for your great service Arony, thanks to you my wife and I had an unforgettable experience!

Was this review helpful? Yes No
Link to This Review
Amelia Cindy   –

Memorable Safari with Castro- Thumbs up

Friends
I had no idea of how I should go about it until I was referred by a friend who had done the safari with Karibu safaris kenya. We were a group of five people and we decided to do 3 days maasai mara and 2 days Nakuru National park. Since it was a group safari Robert gave us friendly prices which was our expectation to be honest..haha. We met Robert when they came to pick us at out hotel in Nairobi with Casro being our guide. This happened really fast and within 20 min we were all packed and off to Maasai Mara with Castro. We had an opportunity to take photos at the great rift valley which was our first stop. Maasai Mara is far from nairobi so travelling as a group make it more enjoyable. also, our second stop was for luch...sorry I cant remember the place but it was nice because of the food and even the services were exemplary. Ohhh..."forgive me" for this one...The road towards maasai mara after the some point was rough considering that it is a rural area but I consider a great experience since I had not done it before. We got to maasai mara at 3 pm and we were assigned our rooms by the welcoming staffs (thanks to Samuel & Joseph) after getting coffee. we were ready by 4.30 and Castro was there to pic us again for the evening game drive. Yeeeeeey...I had been waiting for this..The process at the gate was fast since there were not many cars waiting and in a few minutes were got into the park. The first day was great and we were able to spot lions ( just one of the big five to say) and other few animals since the game drive was brief on that day. we had to go back to to the camp at 6.30 and later dinner. The following day was great since Castro stated that it was a full day game drive and we had to carry packed lunch. we had the opportunity to spot all the big five expect for the Rhino . I really appreciate how Castro and his friends communicated when they saw the animals. this helped us to see many animals unlike other groups in the park. besides, the mara river was great with crocodiles. However, by the time we were travelling there was no wildbeast migration - we felt sad and my friend Sandra thought one could maybe cross on its own. The afternoon game drive was easy as we went back to the camp. It was such a great day. Thank you Castro

The last day at mara we decided to visit the maasai village for cultural dances and learning about their culture. We later left for Nakuru and arrived at 4 pm foe evening game drive. I enjoyed the serene environment with plenty of Flamingos....wait wait...I had not seen a Rhino at Maasai mara... Now this was the home of Rhinos. I saw close to 10 rhinos at a close range. also, we decided to book Nakuru Lodge which is one of the best places you can choose to be. the following day we did an early morning game drive until 11.30 and left for Nairobi.

This was such a memorable experience. Thanks to all the staffs that facilitated and made our experience better. Robert, Castro our guide, Samuel and joseph at mara Camp and not forgetting those at nakuru, you did a commendable job.

I would recomend karibu Safaris when you 're planning yours.

Karibus Safari, represented by our tour guide Aroni, showed us the true beuty of amazing Kenyan nature. The connection of his experience, involvement and our luck allowed us to see everything we could imagane. Increadible views, every possible animals and perfect organization made this trip become unforgatable.