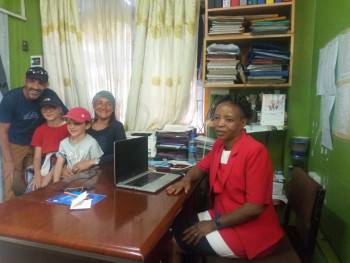 Jocky Tours and Safaris Request a Quotefor a custom tour

We went to Kenya in a family trip (6 people) and had the most amazing time during our Safari with Jocky Tours & Safaris! We went to Masai Mara, Lake Nakuru & Amboseli, for 5 days, and every moment was great.

Jimmy was our guide and we would choose him again if we return, he is incredibly nice, always available for any question, patient and has great knowledge on the animals and the wildlife. We got to see lots of animals and even a hunting!

The accommodations were nice, we loved Enkorok (Masai Mara) and AA Lodge (Amboseli). Both had great rooms and good food. Lanet Matfam (Nakuru) was not out favorite since it was a bit noisy and the rooms weren't great.

Just one thing that didn't go well - we had asked for a 4x4 and got the normal van since this request was made via whatsapp and they forgot to arrange it - make sure you email every important matter. Despite that, overall the organisation was incredible, the price for quality is totally worth it and we recommend this company!

The tour of your life

I highly recommend to choose this company to everyone...I have done 4 days of safari in Masai mara and Nakuru and I have seen more than i ever expected

1 person found this review helpful. Did you? Yes No
Link to This Review
Alvaro   –

Everything as expected and discussed with them, after having spoken with them by mail and doing a tailor-made safari for us. Everything was perfect from the pick-up at the airport until they dropped us back there. The hotels and the camp were much better than expected despite having chosen the basic option.
We got to see the big5 and hundreds of animals, and thanks to our driver, Charles, we always had the best spot for photos. We would repeat without a doubt

Most amazing experience of a life time with the most amazing safari guide, highly recommended!

We have just been on a 4 day safari to Massai Mara and Lake Nakuru which we booked about 8 weeks ago. Communication with Minneh from Jocky Tours was very good, quick responses and all the details you need. Our flight was severely delayed from London by 10 hours but I was able to communicate with Minneh in the middle of the night to rearrange our scheduled pick up time from JKIA airport. A Jocky tours taxi was waiting for us at the airport and transferred us towards the office for full payment. We were told someone from the office was going to meet us at a petrol station to pay and start our safari from there as it was late afternoon and there was traffic to get to the office. We were a bit worried about this but sufficient documentation put our minds at ease and Jocky tours clearly did this to ensure we could start our safari and had our best interests in mind. We stayed in midrange accommodation which was above the standard we were expecting and provided good service. Above all of this, I must talk about our safari guide, Jack. He was amazing at his job and we will always remember him as part of our experience. Jack was extremely knowledgeable and could answer every question we had about the flora, fauna, massai and Kenya in general. He was also an excellent driver and handled the roads and tracks with great skill. We felt Jack went above and beyond to find animals in the Mara and get us as close as possible to the animals. We were lucky enough to see the Big 5 including a black rhino in the Mara as well as a wealth of other wildlife and plants, unforgettable and unlike anything I have ever seen before. Best experience of our lives, we felt safe and that the tour provided good value for money. The Kenyan people were very friendly and welcoming, wanting to show off their beautiful country, and it is without a doubt the most beautiful country I have visited.

I couldn't recommend a safari in Kenya and Jocky Tours enough.

1 person found this review helpful. Did you? Yes No
Link to This Review
Rachel   –

There's no one friendlier and more determined to find us the BEST animals than JAMES!!

James was the best safari driver I could imagine!! From the moment we got into the jeep, James made us feel welcome. And it really seemed to me that despite having been a safari driver for many years, he was still excited to see the animals too.

However, the best thing about James was his determination and ability to find us the coolest animals. We would just ask him "James, can we see cheetahs? Can we see a leopard? Can we see a herd of elephants?" and twenty minutes of radio-ing, searching, and speedy driving later, we'd see them. I'm sure some luck was also involved, but without James' detailed knowledge of where the animals were and his EXTREME determination to get us there, we definitely would not have seen as many cool things.

We only did one full day of safari but we were able to see nursing baby elephants, a lion cub, cheetahs hunting (twice), a leopard, a lion eating a zebra, lionesses hunting, tons of hippos and crocodiles, the Great Migration, a herd of elephants, a serval cat, hyenas... the list just goes on and on.

Also, when the majority of our group wanted to do the cultural walk but my partner and I wanted to do another morning of safari, James insisted that we should be able to get that safari and actually set up a private drive for us (at no extra cost). He was just that determined to make sure we got the experience we wanted.

Book with Jocky Tours for James, you won't regret it!

Was this review helpful? Yes No
Link to This Review
Arianna   –

Amazing safari in jeep with John

We had a 6 days safari budget tour in Masai Mara, Nakuru and Amboseli with a 4x4 jeep.
John was our driver and guide, he is a very good guide in driving safe and in explaining and catching all the animals. He is available to accomodate any request of the group.
The agency assists you in giving any information requested.

One note: toilet of the tented camp in Masai Mara is very poor and can be improved.

Was this review helpful? Yes No
Link to This Review
Joy   –

Great experience exploring Kenya with them.

We had an amazing time with jocky Tours. The price was good and they were very flexible to help us with our needs from the beginning.
The guides we had drove responsibility and also knew how to find the animals in the safari. We were very lucky as we saw all the big 5 within 3 hours with them and even had a front row seat to cheetah hunt!
I would definitely recommend them.

Fantastic three days in the Mara

We went as a group of five cousins in our 20s to the Mara for three days with Geoff and it was everything and more we could have asked for. Peak efficiency and fab accommodation at Enkorok Lodge. Geoff is a five star guy.

The 4 day Masai Mara/Lake Nakuru and Naivasha is one of the best ‘bang for buck’ experiences I could have ever hoped for. Communication with the team was super easy if you give yourself enough time to buy a cheap sim card. Our tour guide, Charles, was always on time, full of information and help, and knew the ins and outs of the Mara which meant we saw the big 5 all in two days! There is no internet for the first two days of the trip which is fine as we bonded as a group and it was nice to get away from the phone. Travelling with Jockey Tours was super reliable thanks to our guide Charles and the team back in Nairobi. The tour of the Masai Mara, Nakuru and Naivasha was incredible, an experience that cannot be captured in words unless you see it for yourself.

2 people found this review helpful. Did you? Yes No
Link to This Review
Victoria   –

Jocky tours was unbelievable. Our guide Jeff was amazing. So friendly and pleasing he went out of his way for us ensuring we saw everything we pleased. Good value for money the quality is very good. Would highly recommend.