Becoming a Safari Guide -Week 4: Lions Under the Bush

A month ago, Asilia Africa invited a person of great intellect to come and sit in on their wildlife safari guide training camp in northern Tanzania’s Tarangire National Park. Now, please don’t tell Asilia this, but that person wasn’t actually able to make it. So I snuck in and went instead.

Over the past few weeks, I’ve sat in on lessons about the bird life of the African savannah, the ecology and how to run a bush kitchen. The other participants on the course might disagree, but I like to think I’ve learnt a lot over the past month. Although I’ll grant you that learning how to safely remove a hyena from a camp kitchen may not come in so useful when I get home to France. Unless of course the same techniques apply to hedgehogs. 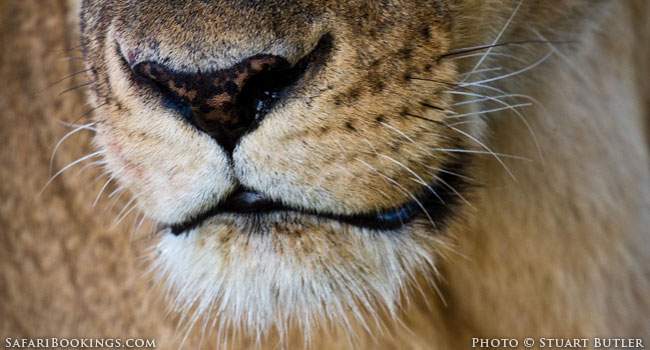 For this, the final week, of the course I was going to learn all about the mammals. Before I came out to Tanzania this was the week that had filled me with the most anticipation. There would be up-close encounters with elephants. There would be bone-gnashing hyenas, And there would the chance to stare down full-maned lions. It was, I figured in my innocent bravado, going to be a non-stop, action-packed adventure. One in which I would chuckle in the face of wildlife danger and come out of the course like some kind of Steve Irwin crossed with Rambo. And so the case might have been but for the fact that I’m actually scared of pretty much any animal more ferocious than a goldfish.

On my very first night at the gorgeous Olivers Camp where the course was taking place, I was woken in the night by a pride of lions clawing at the tent walls. I lay in bed with the sheets pulled up tight over my head for a couple of petrified hours. Meanwhile, they paced around and around the tent, brushing up against the side of it and trying to climb up on top of it. Eventually dawn came and I crept outside to investigate. The lions footprints, which even I had to admit were a little smaller than I had expected, were everywhere around the tent. And I was clearly lucky to have survived the dark night. Just then one of the guides off the course walked past and I called him over to look at the footprints. “Ohh nice”, he said, “a mongoose has been here”… 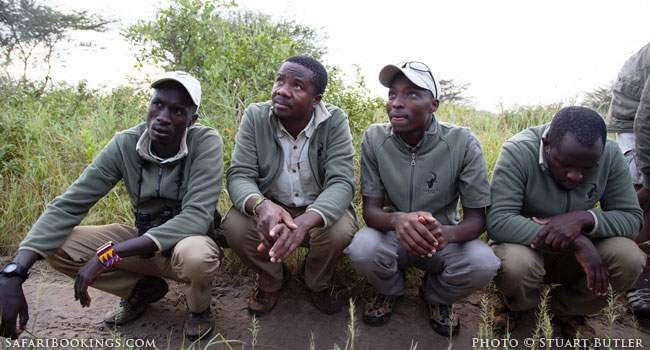 Tarangire in the dry season is one of the most spectacular parks in East Africa. The park centres on a couple of vast, permanent swamps. Wildlife of all shapes and sizes files into Tarangire from miles around to take advantage of this relative Garden of Eden. There are huge herds of buffalo, thousands of elephants, streams of wildebeest and zebra and an awful lot of very contented lions.

However, now is the wet season and this year has been a wetter one than normal. And at times like this almost all the bigger mammals leave the park and spread out across the Maasai steppe to feast on rain-fed new grasses. On the surface this might make running a mammal guiding course in Tarangire seem quite difficult. But in fact it actually means that the guides, both trainee and those on refresher courses, find themselves tested more. And when large animals are scarce, the guides have to show more skill at tracking and understanding the creatures guests might want to see.

As I followed the guides around an often very water-logged Tarangire I photographed what they got up too. 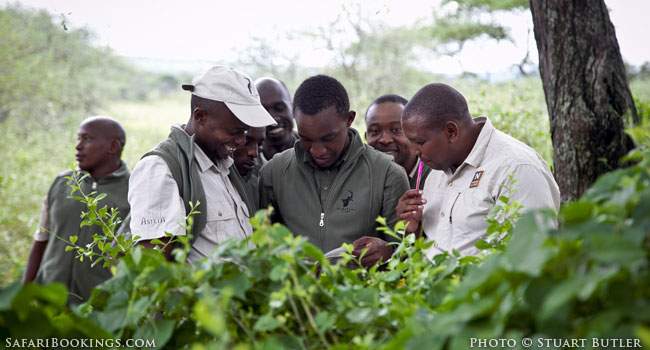 Looking for lions in the bush – The evening before this picture was taken a group of lions (real lions this time and not a mongoose or dormouse or whatever else had been frightening me in the night) took cover in this bush. We went to investigate and to look for clues. It was perhaps for the best that the lions had moved off over night. 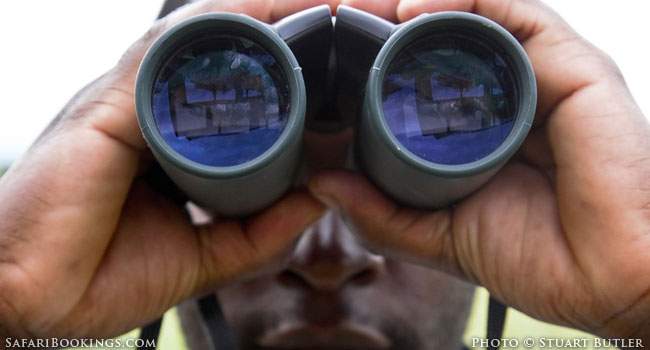 In Search of Wildebeest

A safari guide hopefully scans the horizon for herds of wildebeest. Unfortunately all he can actually see is a rather dim writer and photographer prancing around just in-front of him. The guide got very excited at this and claimed he had discovered a creature that could only be described as the ‘Missing Link’ between chimpanzees and humans. 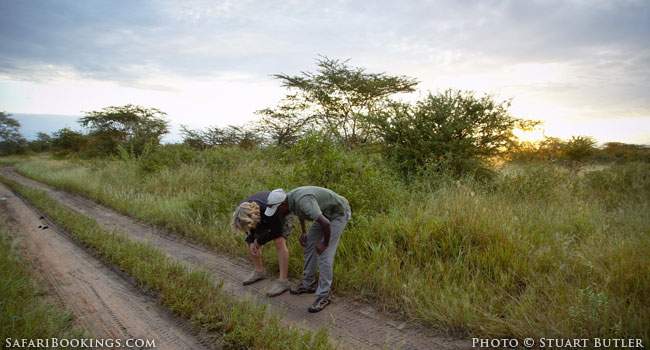 Whose Tracks Are These?

Head safari guide Pietro and a camp guide carefully examine some unknown tracks on the road. They were completely baffled by these tracks. And they spent a long time studying various field guides trying to work out what kind of creature might have made them. Eventually I had to tell them that they were tyre tracks. 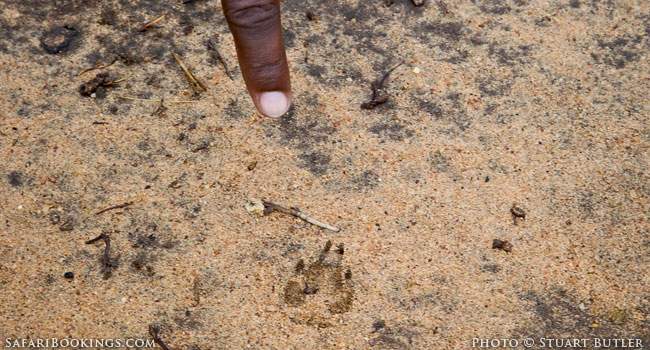 Between the tyre tracks and our own footprints we did also find some real life animal tracks. Well, okay I didn’t, but everyone else did. These ones, with their long, extended middle claws, got everyone tremendously excited. They’re made by a bat eared fox. 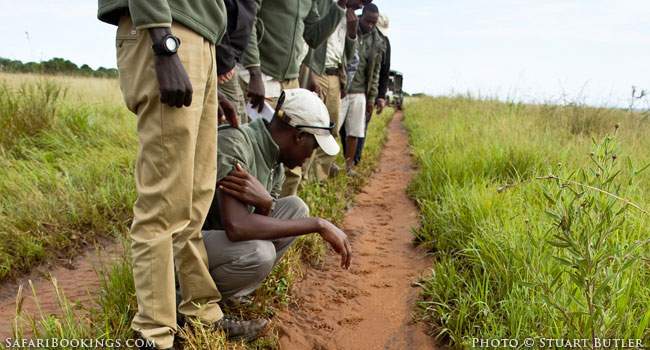 The safari guides examine an interesting set of footprints. It took some time for them to come to a unanimous agreement as to whether these were porcupine or honey badger prints. The two can be quite similar. Eventually they agreed on porcupine. However, according to my field guide they had been made by a yeti. 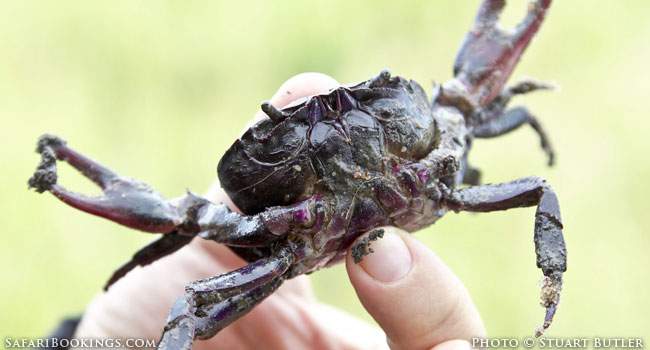 Whilst we couldn’t find any leopards or lions, we did find a crab. This was unexpected in a savannah reserve hundreds of kilometres inland of the beach. If anyone lounging on the beach in Zanzibar finds our lions then we’ll swap them for your crab. 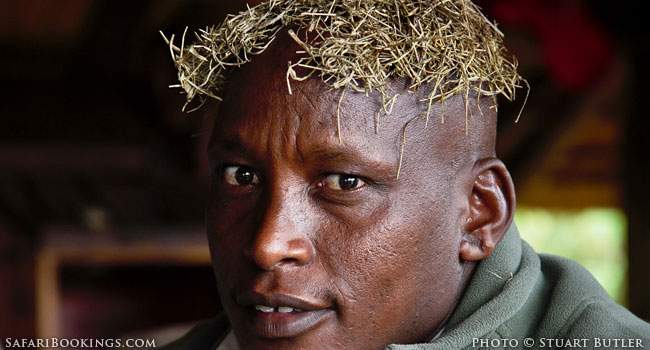 Eventually it was decided that the only way we would find any mammals was by being cunning and disguising ourselves. Here one of the guides has cleverly disguised himself as a weaver bird nest. Or perhaps he’s just trying to make up for hair loss. 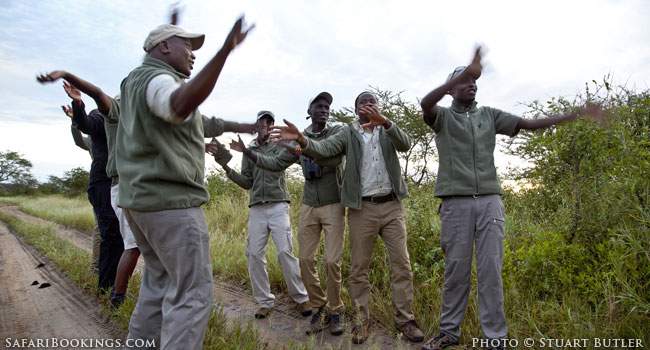 Unimpressed by the weaver bird nest disguise, the guides began imitating some small, succulent trees blowing in the breeze. Despite the obvious brilliance of this disguise it failed to attract any elephants. This was a real shame because I would have loved to have known what they would have done had some elephants rocked up. 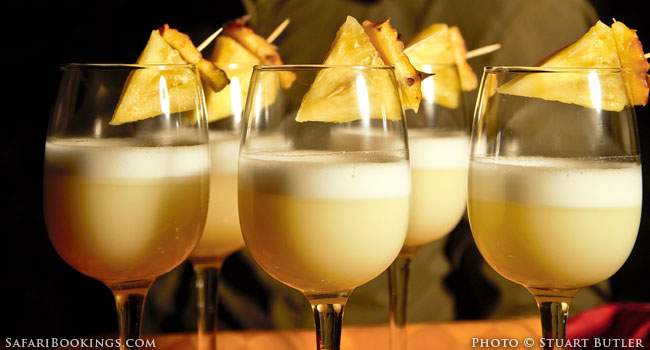 Michael is the head trainer of bar staff for Asilia and he’s holding a tray of pina coladas. The picture has nothing whatsoever to do with the mammal course, but what the heck, I like pina coladas. It’s the sort of drink a man needs just before a night of being kept awake by a mongoose.

What Does It Takes to Become a Safari Guide?

To learn more about what it takes to be a safari guide, follow us on our blog. We have loads of good stories to tell!

SafariBookings is the largest online marketplace for African safari tours. Easily compare offers from 3,633 top rated tour operators. Make decisions like a pro by using and guides.
More About Us