Why Patience Is a Virtue on an African Safari

Some African safari-goers make wildlife spotting sound really easy. Ask them if they saw any elephants and they’ll say, ‘Dozens, in the first few minutes, right outside the camp’. What about lions? ‘Yep, a huge pride. With lots of cubs!’ Leopards? ‘One killed an antelope and dragged it up a tree right next to our car!’

Mention the rare African penguin or the even rarer African wild dog, or aliens for that matter, and they probably saw those too. But for most of us, the reality is that spotting animals on safari is not so straightforward. It usually requires plenty of time, a good dose of luck, and most of all, tons of patience.

Persistence Pays Off on an African Safari

Don’t underestimate the importance of patience on an African safari. Sure, you might be fortunate enough to see loads of wildlife when driving across a flat, open park like South Africa’s Kruger. But in places such as Zambia’s Lower Zambezi, where thick vegetation crowds the winding dirt tracks, it can be hard to catch sight of any animals, even the bigger ones. You have to be persistent in carefully watching your surroundings, and hope for the best.

Patience is also essential on organised night drives through national parks. Safari-truck personnel are very skilful when it comes to spotlighting Africa’s nocturnal hunters and prowlers in action. But the fact is that their efforts are not always fully rewarded. You’re in the animals’ natural habitat now, and it’s basically up to the wildlife when (or if) they appear. 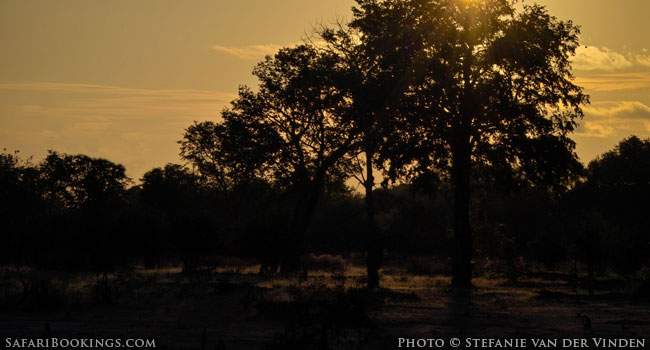 Your capacity for patience will be most tested when you try to spot an animal that’s good at making itself scarce, or whose survival is threatened. (There’s usually a relationship between the two.) This I discovered for myself on a wildlife spotting trip in southern Africa a few years ago.

I was visiting Grootberg Lodge in the rugged Damaraland area of central Namibia. The lodge is perched on a ridge high above the stunning Klip River Valley. But while the views from the outside deck are fabulous, the reason people come here is to go on rhino-tracking trips. Seeing a white rhino in the flesh on an African safari is remarkable enough, but here you might just see the critically endangered black rhino, of which there are only a few thousand left in the wild. It’s an incredible opportunity, one made possible by the efforts of the local Khoadi–Hoas Conservancy in protecting these animals.

What makes the rhino tracking at Grootberg particularly memorable is that much of it happens on foot. The first part of the trip involves your 4WD carefully picking its way down a steep track to the valley floor. Then the search for a rhino begins in earnest, with your driver coordinating the quest with fellow staff over two-way radios. When fresh rhino tracks are finally spotted, everyone piles out of the vehicle and the hunt is on. 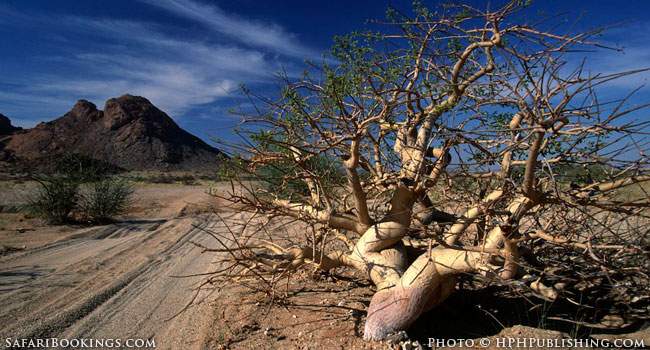 In the case of my African safari group, our driver found footprints made by a lone adult male that wereonly a few hours old, and so we hustled to try and catch up with the animal. Now, the assumption rattling around my head, if not those of my companions as well, was that we’d quickly overtake the fellow. After all, this was a creature that weighed around 1400 kilos: about the same as the average compact car, but without the horsepower. Surely he couldn’t go very fast, or very far.

Well, we tracked that animal for the best part of the day and we never got close to him. He was The Invisible Rhino, merrily leading us on a circuit of his valley in a search for food, while steadily keeping his distance. Despite our group boasting more high-powered binoculars than a Hollywood commando movie, no-one so much as caught a glimpse of that elusive beast.

Disappointing? In one sense yes: I’d come to Grootberg as someone who hadn’t yet seen a rhino in the wild (white or black), and that hadn’t changed. But even so, I was compensated magnificently for my patience in following that rhino’s trail. How often do you get to spend almost an entire day exploring the bushland in a remote African valley, with a spectacular escarpment as your skyline? How often do you find yourself walking in the footsteps of one of Africa’s most extraordinary animals, fully aware that you’ve momentarily joined it in the wild instead of being a passive observer behind a windshield?

No, I didn’t get to see a black rhino that day. But I did get a unique first-hand experience of the African wilderness, and I couldn’t have been happier with that. 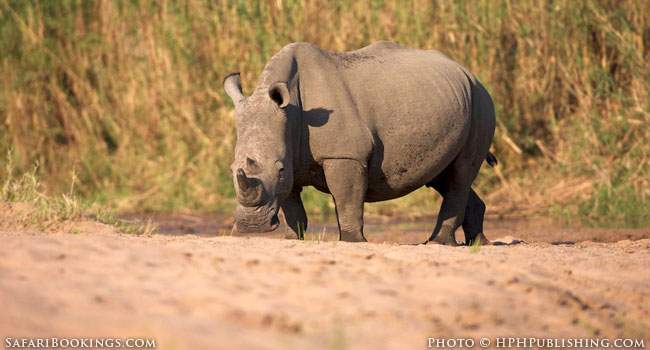 There’s a postscript to this story. It shows how wonderfully unpredictable wildlife spotting can be, which makes perseverance on an African safari all the more important. From Grootberg I travelled east into Etosha National Park, to the camp at Okaukuejo. After setting up my tent, I wandered over to a small waterhole and settled down on a bench overlooking the oasis with a cold beer. It was the middle of the afternoon, which is not a prime wildlife-viewing time, so no-one else was there. That meant I had the following spectacle all to myself.

I was reflecting on the past few days of my trip, including the Klip River Valley experience, when a large shape entered my peripheral vision. It was a big white rhino, lumbering along the far bank of the waterhole. I was tempted to laugh at the serendipity of the moment, but instead I just kept my eyes on my surprise visitor, and waited patiently to see what would happen next.