South Africa’s southern city of Port Elizabeth (PE) is well located near the eastern end of the Garden Route and a string of malaria-free wildlife reserves, most famously Addo Elephant National Park. Private wildlife reserves  line the N2 highway and other roads between Addo and Grahamstown. These offer a range of wildlife-watching experiences, scenic backdrops, luxurious lodges and conservation programs.

More are found around the Kariega and Bushman’s Rivers inland of Kenton-on-Sea, with river cruises and canoeing on the menu of outdoor activities. Most of the wildlife reserves close to Port Elizabeth have all of the Big Five (lion, leopard, elephant, rhino and buffalo), while Addo adds two ocean giants to make the Big Seven. 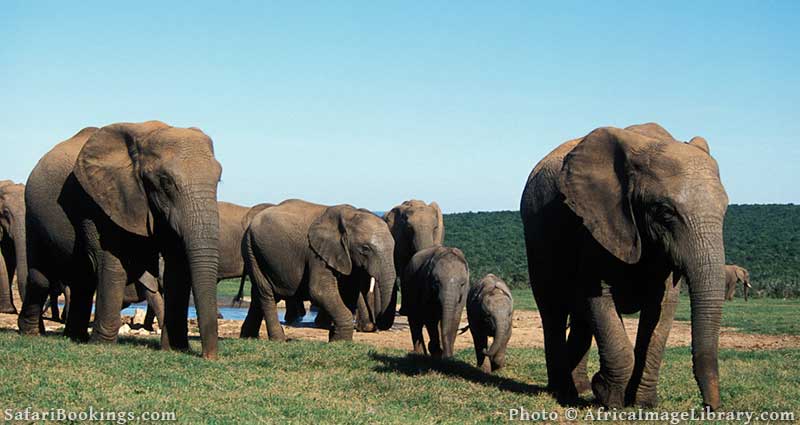 With most of South Africa’s major national parks found in the country’s northern bush, Addo is a unique treat for wildlife watchers on the southern Sunshine Coast. The country’s third-largest park at almost 2,000km2/772mi2, Addo hosts not just the Big Five but the Big Seven (add great white sharks and southern right whales). Most significant are the 600-plus elephants, remnants of the herds that once roamed the Eastern Cape province, which hunting and farming had reduced to 11 individuals in 1931, when the park was established. 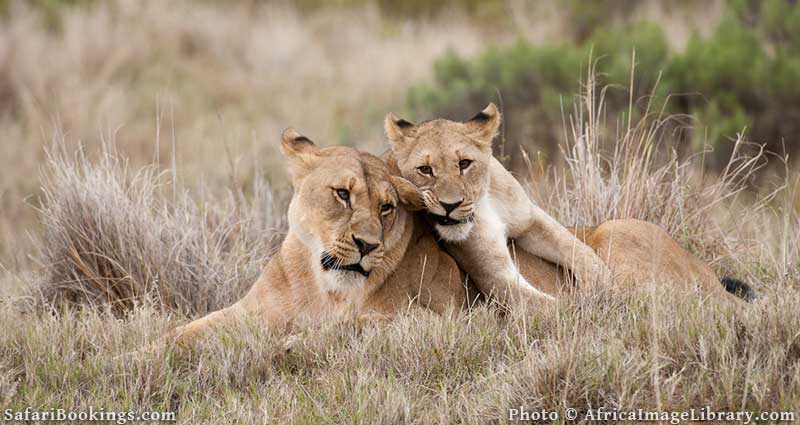 Perhaps the most famous of the private game reserves near Port Elizabeth, Shamwari is a 70km2/27mi2 conservation project with the Big Five and, like Addo, five of South Africa’s eight biomes. (Nama Karoo, Succulent Karoo, Fynbos, Forest, Thicket, Savanna, Grassland and Desert) Guests can visit the Wildlife Rehabilitation Centre and Born Free Big Cat Sanctuaries and choose between six luxurious lodges and the Explorer Camp. Swapping four wheels for a walking safari, the Explorer Camp comprises three tents, an outdoor bathroom and a plunge pool on a plateau amid basalt and granite extrusions. 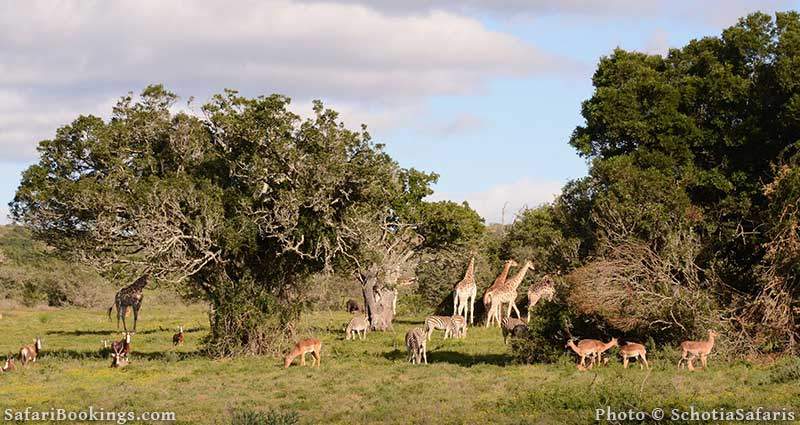 Another gem among the safari parks near Port Elizabeth, Schotia is the Eastern Cape’s oldest private wildlife reserve and one of the densest stocked in Africa, with over 40 mammal species among its 2,000 animals. As you will learn on the Tooth & Claw Safari, Schotia was the area’s first reserve to introduce free-roaming lions, evoking the African bush before mankind ruined everything. It has even had to reduce the big cats’ numbers. It offers fantastic day trips from PE, which pair Schotia with a trip around adjacent Addo or an Algoa Bay sea safari, and accommodation from lodges to a tented camp. 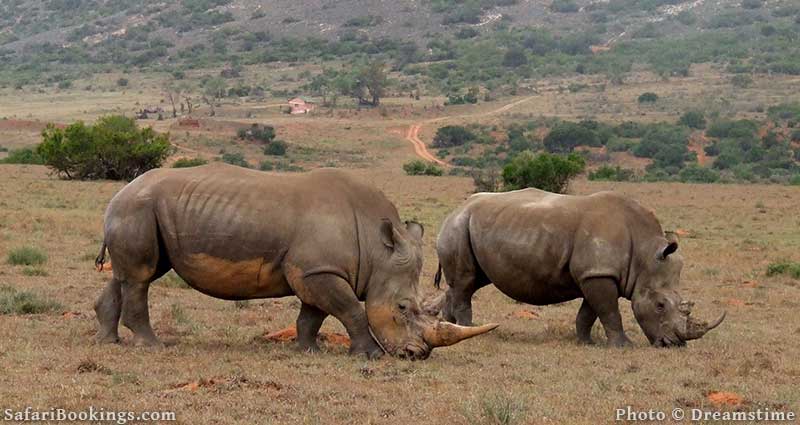 Named after the Xhosa for aloes, Amakhala’s 75km2/29mi2 of bushveld and savannah offers sightings from the Big Five to elusive animals such as bat-eared foxes and hyenas. Formed by a group of sheep and cattle farmers, whose families had farmed here since the early 1800s, Amakhala has a conservation mission to reintroduce animals to the land where they once roamed freely. Projects initiated by the Amakhala Foundation include a craft center, which you can visit, and volunteering opportunities and ranger training are available. There’s a range of lodges, offering day safaris (from R1,200 per person) and overnight visits, as well as two- to three-hour horse trails (R850 per person). 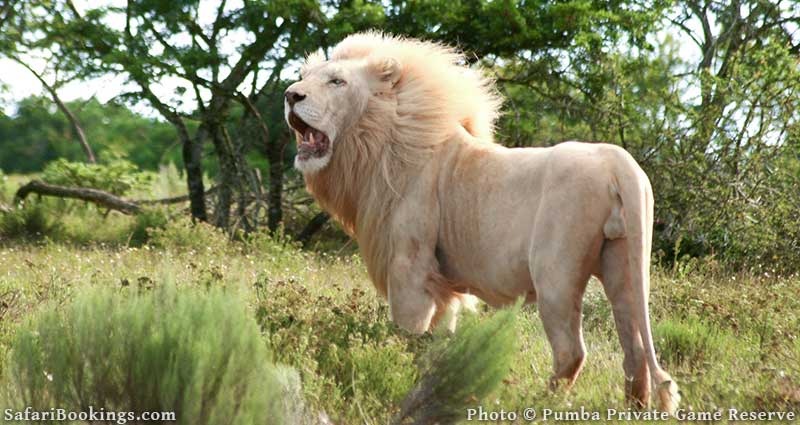 One of the most exclusive game reserves near Port Elizabeth, Pumba’s animal population includes the Big Five, hippos, hyenas, cheetahs, giraffes, 300-plus bird species – and a famous population of rare white and tawny colored split-gene lions. These lions, one of Southern Africa’s only free-ranging, self-sufficient prides, are a result of Pumba’s environmental care and social responsibility mandate. This has also bolstered the leopard population, leading to frequent sightings. There are two luxurious lodges, one of them on Lake Cariega, and activities from day safaris and wilderness walking trails to night drives and spa treatments. 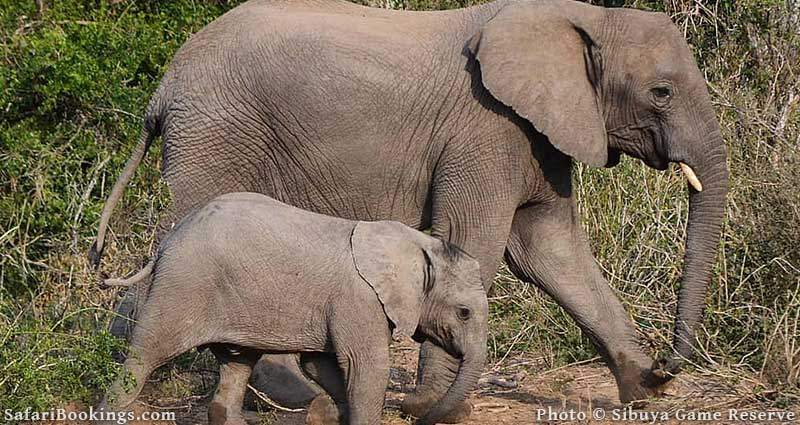 Checking into Sibuya is a little different: reception is in the coastal village of Kenton-on-Sea, from where the reserve is reached on a 45-minute boat trip up the Kariega River. There are two solar-powered eco-camps with tent accommodation, one tucked into a riverine forest and the other offering meandering walkways through indigenous bush, and a more luxurious lodge. As well as the Big Five, Sibuya’s uniquely navigable river means water-loving wildlife from elephants to otters can be spotted, as can an unbeatable 400 bird species. Canoeing and fishing also make the most of the Kariega, as do day trips to Sibuya. 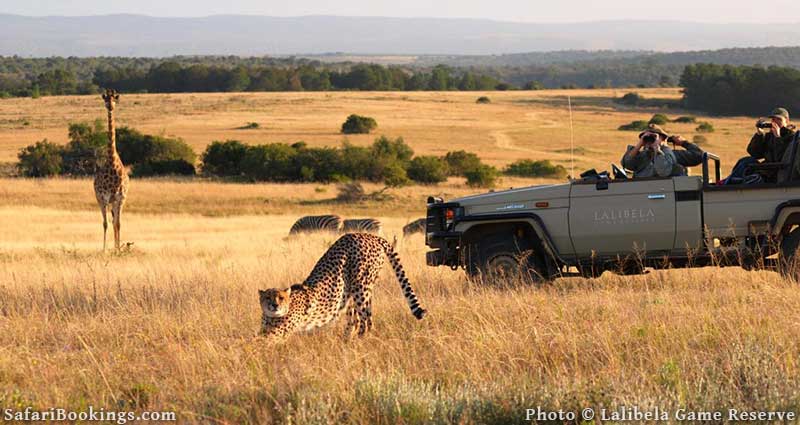 Lalibela has one of the highest densities of free-roaming lions among the safari parks close to Port Elizabeth, thanks to the 105km2/41mi2 reserve’s vast tracts of savannah grassland, where the big cats can hunt huge herds of plains wildlife. Zebras, impalas, wildebeest, red hartebeest, blesbok and eland nervously flick their tails, watching for predators including leopards, cheetahs, hyenas, jackals and lynx. Recognizing that a trio of ingredients makes memorable safari experiences – wildlife watching, accommodation and food – Lalibela’s five lodges have features such as Kichaka’s hippo-frequented waterhole and island dining area. 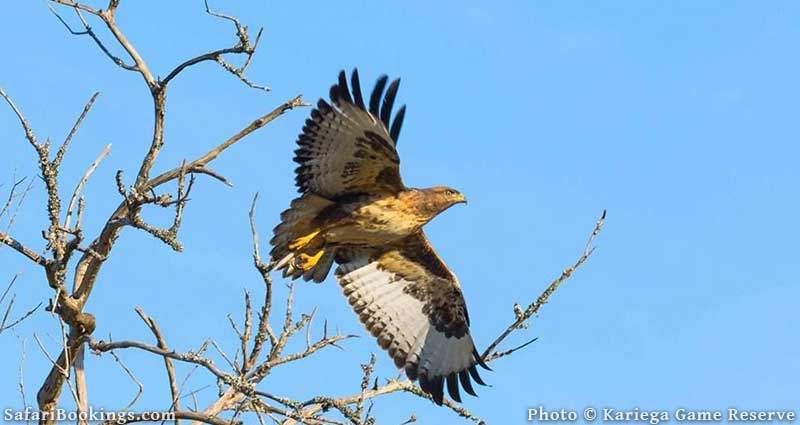 This 100km2/39mi2 private reserve in the Kenton-on-Sea hinterland incorporates five biomes and both the Kariega and Bushman’s Rivers, creating good chances of spotting a hippo or African fish eagle on the riverbanks. The diverse environments offer a range of activities, including river cruises, canoeing, fishing, bush walks and wildlife drives, and safari lodges in five dreamy locations, from a remote valley to the Bushman’s River. Conservation projects include the Kariega Foundation, a rhino-adoption program and volunteering opportunities. 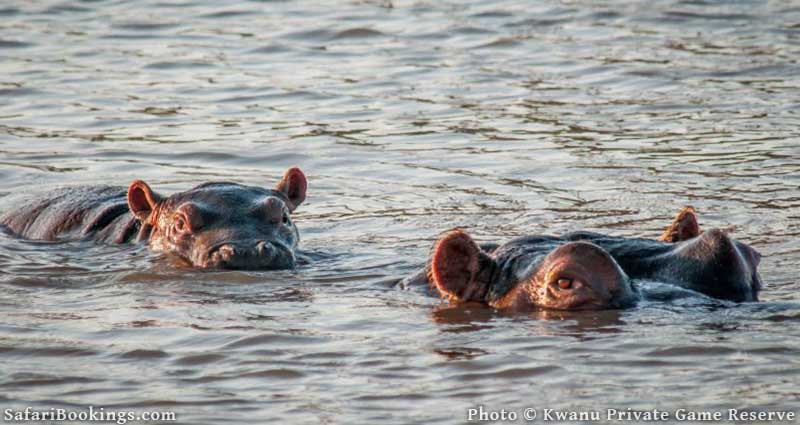 Kwantu covers 60km2/23mi2 of the Sidbury Plains in the heart of Frontier Country, once farmed by the 1820 Settlers from the UK. Indeed, there’s an actual village here, with an Anglican church, tennis courts and a cricket field (the local cricket club dates to the 1890s). Spotting the Big Five is possible, too – on either a day visit (from R1295 per person), with morning and afternoon drives starting at 9 AM and 2 PM respectively, or an overnight stay. The four accommodation options include Kwantu Lodge, overlooking a hippo dam, and the cuisine ranges from traditional South African to Afro-Asian fusion.

SafariBookings is the largest online marketplace for African safari tours. Easily compare offers from 3,494 specialized tour operators. Make decisions like a pro by using and guides.
More About Us