Searching For Santa in Africa

For most people in Europe and North America, Christmas means snowy nights, tinsel, carols and stolen kisses under the mistletoe. But what about Christmas in Africa, where lions are more common than snow? Now that is a refreshingly different way of passing the festive season!

With a continent as diverse as Africa, Christmas celebrations vary hugely from region to region. A uniting factor is that Christmas in Africa is a more religious occasion than the commercialized, spend, spend, spend extravaganza that characterizes Christmas in Europe and North America.

So, if you’re going to be spending the festive season on safari in Africa here’s our guide on what to expect.

Presents generally play second fiddle to family time during an African Christmas. Tight budgets mean that most families can’t afford much in the way of presents. In rural areas there are few places to actually buy toys. Most parents do buy something for their children – a new set of smart clothes is a popular gift. For most children this is one of the few presents they will get all year. In Zambia, one nice tradition is that children take small gifts to the local church on Christmas day and these in turn are given to children less fortunate than them. 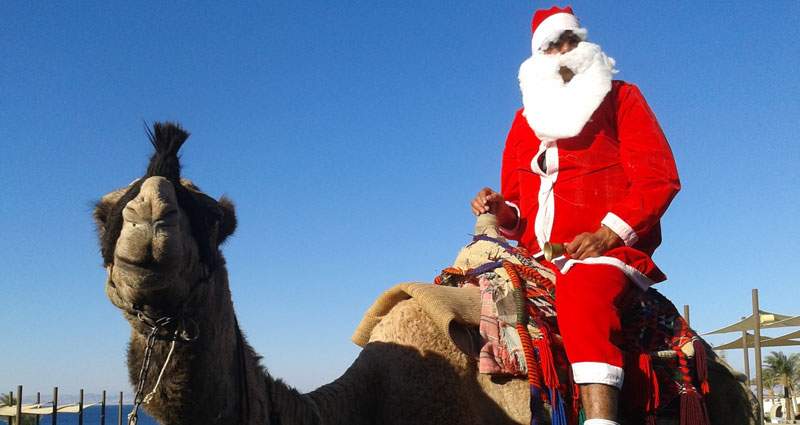 Of Sleighs and Reindeer

Another thing that makes Christmas in Africa different is Santa's means of transportation. In North America and parts of Europe Santa Claus flies around a snowy landscape on a sleigh pulled by a team of magical reindeer. However, when he got to Africa the reindeer were so frightened by the lions that they flew straight back to Lapland. So Santa had to find a more African way of getting about. In Kenya it’s said he cruises over the potholes in a pimped up 4x4 safari jeep. Elsewhere he might bring the presents by horseback or even on a camel. We can’t guarantee you’ll get a sack full of presents. What we can guarantee is a sack full of memories by imitating an African Santa on this camel-back safari in northern Kenya.

Turkey is the standard Christmas dinner in the Anglo-Saxon world. In much of Africa people realized that roast turkey is possibly the world’s most boring food. In most parts of Africa Christmas dinner will either be barbecued goat with maize or chicken with rice. Use these Nigerian festive recipes to liven up your Christmas lunch. In the northeast of the continent, Ethiopians celebrate the end of six weeks of meat-free fasting with injera and wat. Injera is a rubbery, sour fermented pancake (whilst this doesn’t sound too appetizing let us assure you that it’s still more interesting than turkey). Wats are essentially different kinds of curry. Bad news though, if you’re in South Africa. They do like to eat turkey. And they may even make you wear the silly paper hat…

So, with few presents, no turkey, no snow and no reindeer, Christmas in Africa probably isn’t sounding very Christmasy. But what about the religious side of it? Well, church is something most Christian Africans excel at. Almost everybody dresses in their finest and goes to church on Christmas Eve and frequently on Christmas day as well. Fortunately, a church service in Africa is normally much more colourful, fun and lively than in one of the cold, domineering churches of Europe. There’s lots of singing (very loudly), lots of dancing (very exuberantly), and lots of overly enthusiastic preaching (filled with exciting drama). There can even be a fair bit of people being possessed by the Holy Spirit and going into trances, which is a lot more entertaining than watching dear old Auntie Doris having one glass of sherry too many.

In churches in the DRC (Democratic Republic of Congo) the entire Christmas nativity story is re-enacted as a theatre performance. What some of the actors may lack in acting skills they make up for with sheer enthusiasm, which is good because the performances normally last for hours and hours. 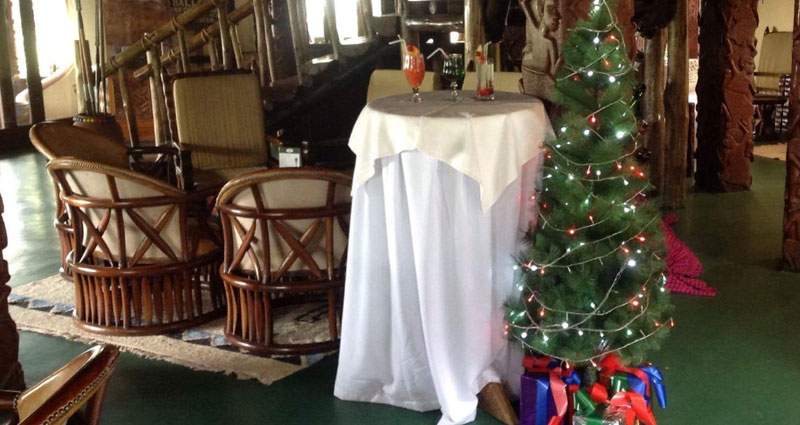 Still, if that sounds like a long church service then just be glad you’re not in Mali. Despite being a majority Muslim nation, Christmas in Mali is a national holiday (as it is in a number of other Muslim countries in Africa) and Christians flock to the churches. They arrive on Christmas Eve for a night of preaching and worship. And then they flow through to Christmas Day in order to listen to children reciting the Bible by heart and carry on through to December 26th for baptismal services. Some people spend a solid 24hrs or more in church. Thank goodness Christmas comes but once a year…

What Date is Christmas in Africa?

Jesus was born on December 25th right? Well, not if you’re in Ethiopia he wasn’t. Ethiopia is one of the planet's oldest Christian nations, but Ethiopia follows the Orthodox Church and uses the old Julian calendar. This means that Christmas in Ethiopia takes place on January 7th.

So, with all these interesting ways of celebrating Christmas in Africa it might be something of a disappointment to learn that (in most ways) when you’re on an African safari Christmas is just another day. However, many camps and lodges (the fancier ones in particular) will put on a Christmassy flourish when it comes to lunch and dinner. Chances are there will be a traditional British Christmas dinner with turkey and Christmas pudding, and if you have children with you then most lodges will go the extra effort to make it more magical for them.

In coastal areas things are likely to be a bit more lively with Christmas and New Year parties, and festivals a common occurrence at many of the more popular tourist beaches.

And finally, if you really need snow on Christmas morning then how about watching the sunrise from the glacier-topped summit of Kilimanjaro. This tour will get you to the top of Africa for Christmas Day.

Christmas starts in October at SafariBookings!

We’re no strangers to adding a little Christmas cheer to our SafariBookings office. Fun fact: Our own Dennis, captain of the web developer team, starts playing Christmas music in October. You either love it or hate it! How about you?

We want to wish you a very Merry Christmas or Happy Hanukkah or Kwanzaa, in case you are celebrating.