Diamonds in the Namib Desert Sand

Lying between the inhospitable dunes of the Namib Desert and the vast iciness of the Atlantic Ocean is the tiny time-warped German colonial town of Lüderitz. And its fascinating diamond ghost town of Kolmanskop.

Perched on rocks around a sparkling bay, the quiet coastal town of Lüderitz has just one road in and out from Namibia’s empty and arid interior. It has an unusual isolated existence in a small enclave within the Sperrgebiet. This is Namibia’s restricted diamond area and its name means ‘forbidden zone’ in German. Although it was first visited by Portuguese explorer Bartolomeu Dias in 1487, Lüderitz became the first settlement in Deutsch-Südwestafrika (German South-West Africa) in 1883. It was named after German trader Adolf Lüderitz. The town then rapidly expanded from 1908, following the discovery of diamonds in the desert at nearby Kolmanskop.

Lüderitz has a quaint turn-of-the-century atmosphere. A walk up Bismarck Street, past the German buildings with their gables, winding stairwells, verandas, turrets and bay and bow windows, takes you into an almost forgotten period of Namibia’s history. The most striking buildings are the 1909 Goerke–Haus, the magistrate's residence; the 1909 Krabbenhöft & Lampe building, the town’s first trading store; and the gothic 1912 Felsenkirche, the oldest Lutheran Church in Namibia. But the most interesting sight is the former diamond boom town of Kolmanskop, perched on exposed dunes off the approach road to Lüderitz.

It was in 1908, that railway worker Zacharias Lewala presented a strange shiny stone to his supervisor, August Stauch. Herr Stauch was clever enough to obtain a prospecting licence before having it officially verified as a diamond. A frantic diamond rush began and German prospectors flocked to Kolmanskop. It was said that stones were so prolific, men could crawl on their knees and pluck the glittering diamonds out of the sand by moonlight. And by the 1920s, peak production was over 30,000 carats per day.

Kolmanskop flourished. Luxurious houses, as well as a bakery, butchery, general dealer and lemonade and ice factory were built in the dunes. The finest furniture, fabrics and building materials were shipped in from Europe.  A community centre boasted a restaurant, gymnasium and skittle alley, where an orchestra played regularly at tea dances. The hospital was so technically-advanced it had the first X-ray machine in southern Africa. Actually, it was used principally for detecting secretly swallowed diamonds, not broken bones! European lifestyles had been recreated in an African wilderness.

The making of a ghost town

The success story of Kolmanskop changed radically in 1928 when diamonds six times larger were found on the banks of the Orange River. By 1938 most of the workers and equipment relocated to Oranjamund.  The last residents finally abandoned Kolmanskop in 1956. There was no longer anyone to stop the pace of the ever-shifting dunes as they seeped through doorways and windowsills. And no one to attach roof tiles or window panes when the fierce winds whipped through the streets.

Today the ghost town is a fascinating museum. Visitors can clamber through the dunes to explore the remains of the once grandiose, now sand-swept buildings. Today, you can still see the pale colours of faded wallpaper, elaborate ceiling stuccos and the marble bathtubs. Broken floorboards and staircases, creaking doors, sound of wind blowing through exposed eaves – all add to the ghost town atmosphere. Houses that were once full of diamonds are now full of sand. But don’t forget to keep a watchful eye out for that sparkle in the sand.

Nestled between the dunes of the Namib Desert, Lüderitz has a mild desert climate and most of the year is warm and sunny with hardly any rain. But from December to February there are some ferociously strong winds. In fact, the last 20 kilometres of road pass through shifting sand dunes. A Lüderitz must-do is to pull over and take pictures next to the red triangle warning signs simply saying ‘sand’.

Whether you're a history buff, a safari-goer or both, Namibia is a a beautiful place to visit. There are plenty of safaris in the Namib Desert region and the best time to travel there is during Dry season. From May to October, the sun is virtually always shining. Contact us at SafariBookings and we will be happy to help you with your safari travel arrangements.

SafariBookings is the largest online marketplace for African safari tours. Easily compare offers from 3,496 specialized tour operators. Make decisions like a pro by using and guides.
More About Us 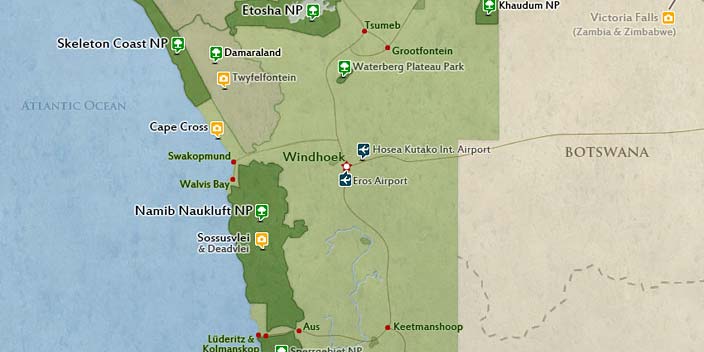