From snowcapped Kilimanjaro to wildlife-rich savannahs to idyllic islands, Tanzania has it all. Wondering where to go in Africa’s hottest safari destination? Here are 10 of the most beautiful places to visit in Tanzania. 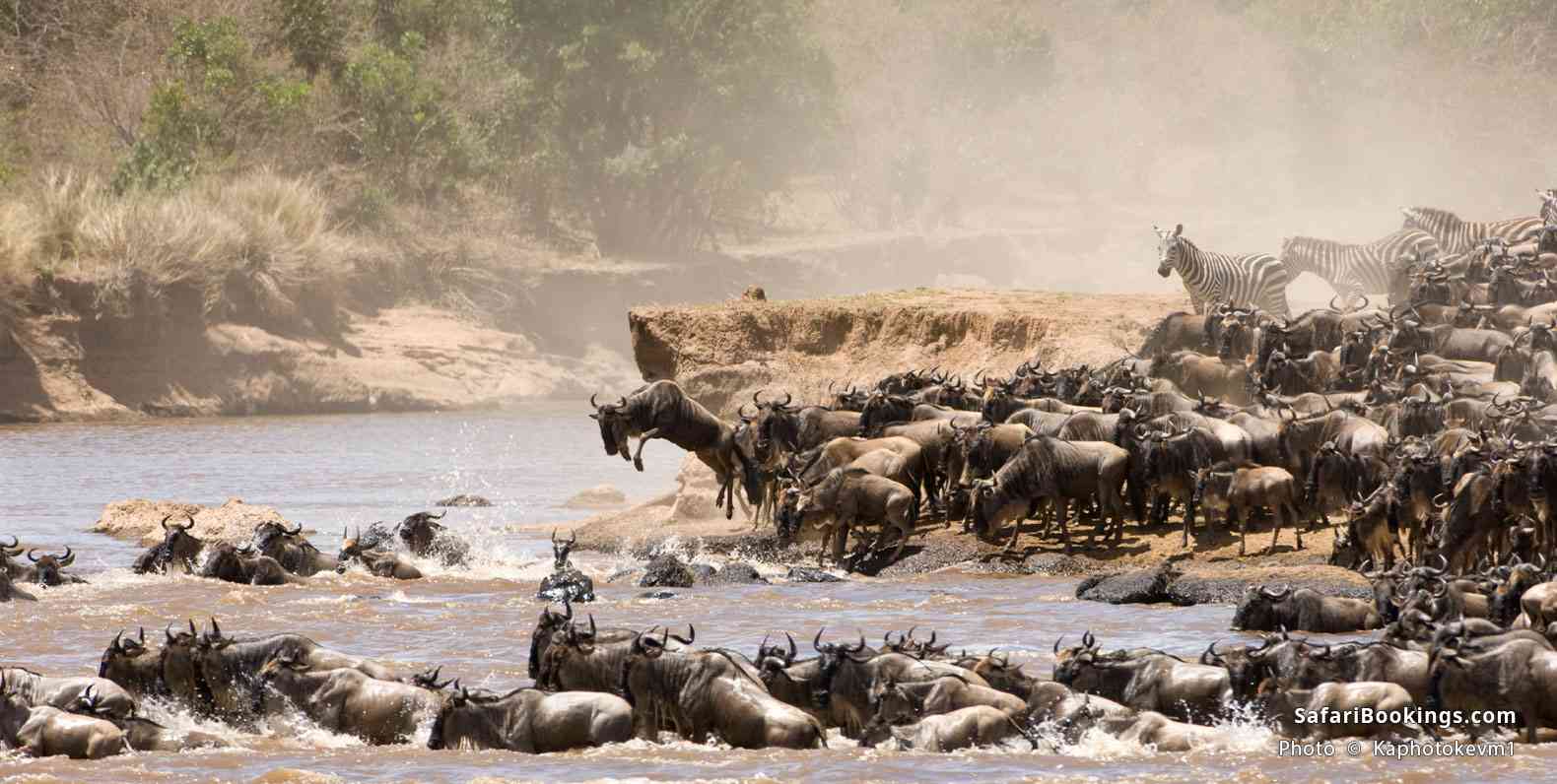 Serengeti National Park is the cornerstone of Tanzania’s Northern safari circuit. It is the arena of one of the world’s most amazing wildlife spectacles, the wildebeest migration comprising 2 million wildebeest, zebras and gazelles. Big cats are never far off and there are few safari destinations where lions and cheetahs are so obvious. While the Seronera area can feel a bit busy at times, a safari in the Western Corridor or Mara River region offers a more exclusive experience. 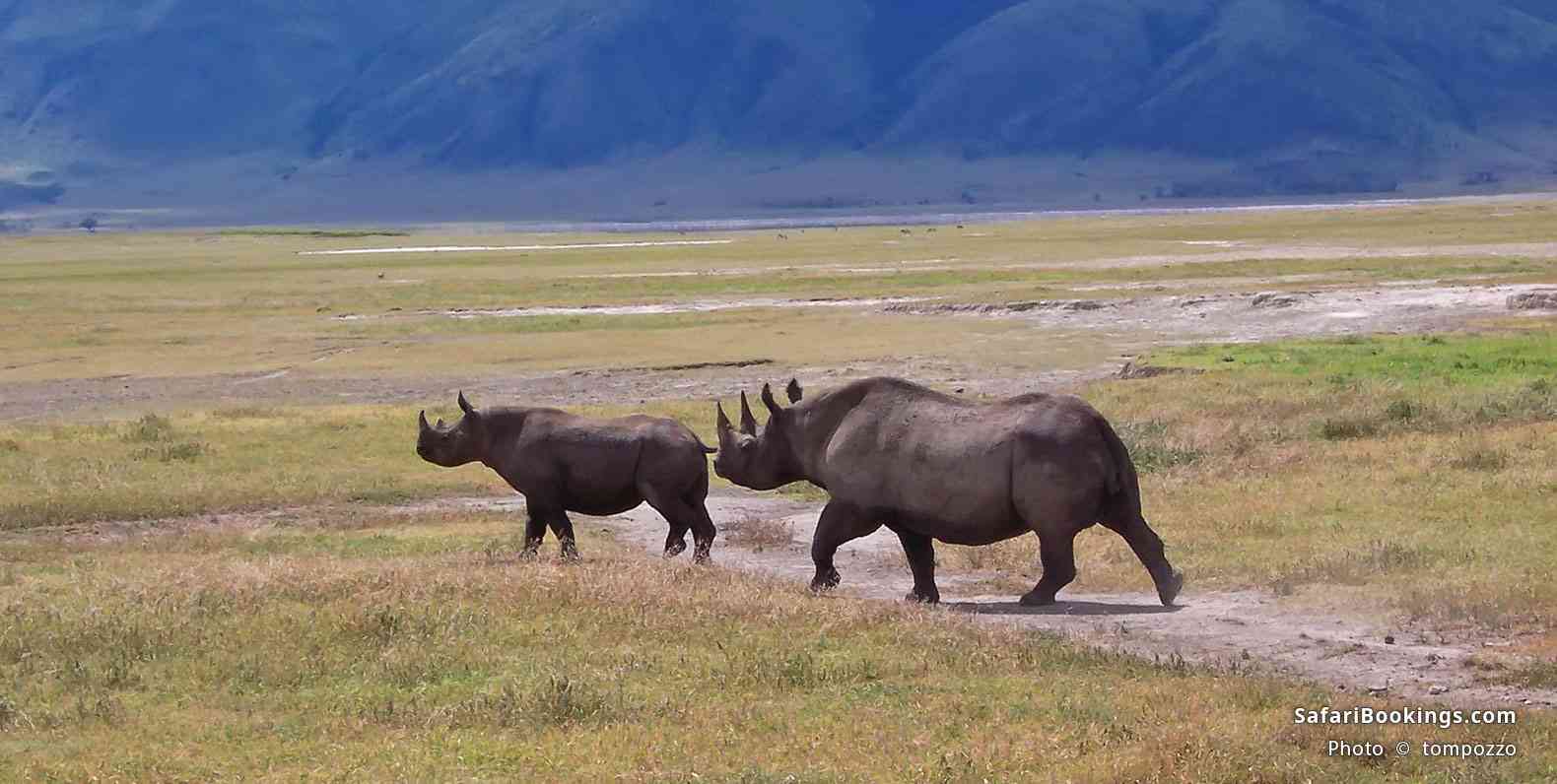 Black rhino at the Ngorongoro Crater

Once a massive volcano, the Ngorongoro Crater is the largest intact caldera in the world. The 260km2/100mi2 crater floor, hemmed in by towering crater walls, teems with wildlife. All of the Big Five are easily seen including the endangered black rhino. This unique refuge is home to the world’s highest concentration of lion and spotted hyena. The latter can sometimes be seen hunting flamingos at Lake Magadi. And then there are the enormous elephant bulls carrying oversized tusks, a rare sight elsewhere in East Africa. 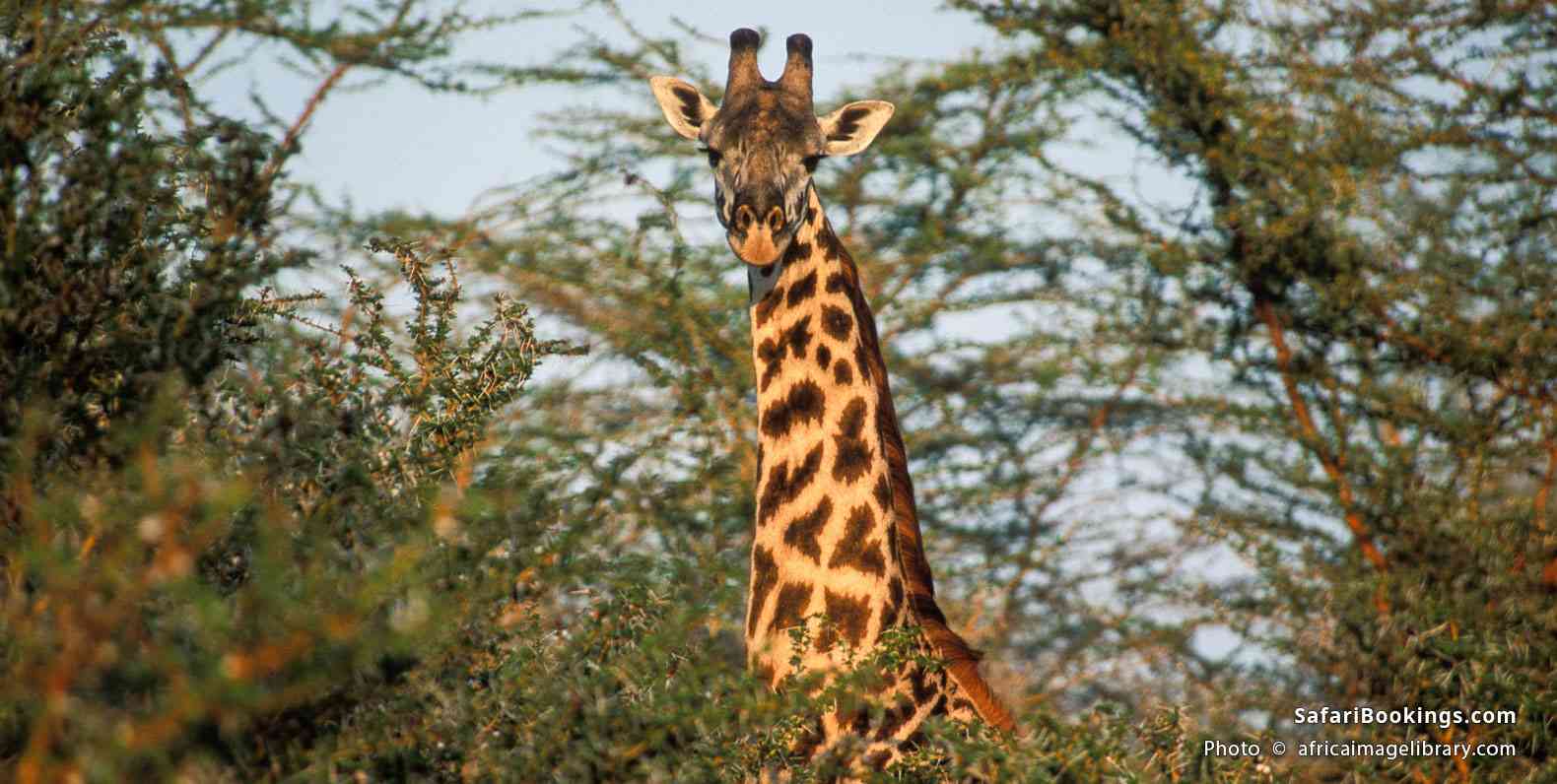 Saadani National Park is one of a kind. It’s the only place in East Africa where the bush meets the beach. Go for a game drive and plunge straight into the Indian Ocean when you get back to camp. You might see elephant, buffalo, giraffe and maybe even lion. There are plenty of antelopes too, including the magnificent sable and the cute little red duiker. A highlight of a stay at Saadani is a river boat trip where you’ll see hippos and a variety of birds. The lovely swimming beach doubles as a turtle-nesting site, and from July through September you might see the little hatchlings running into the water. Despite its unique character, there are only three small lodges in Saadani, which makes for a very uncrowded experience. 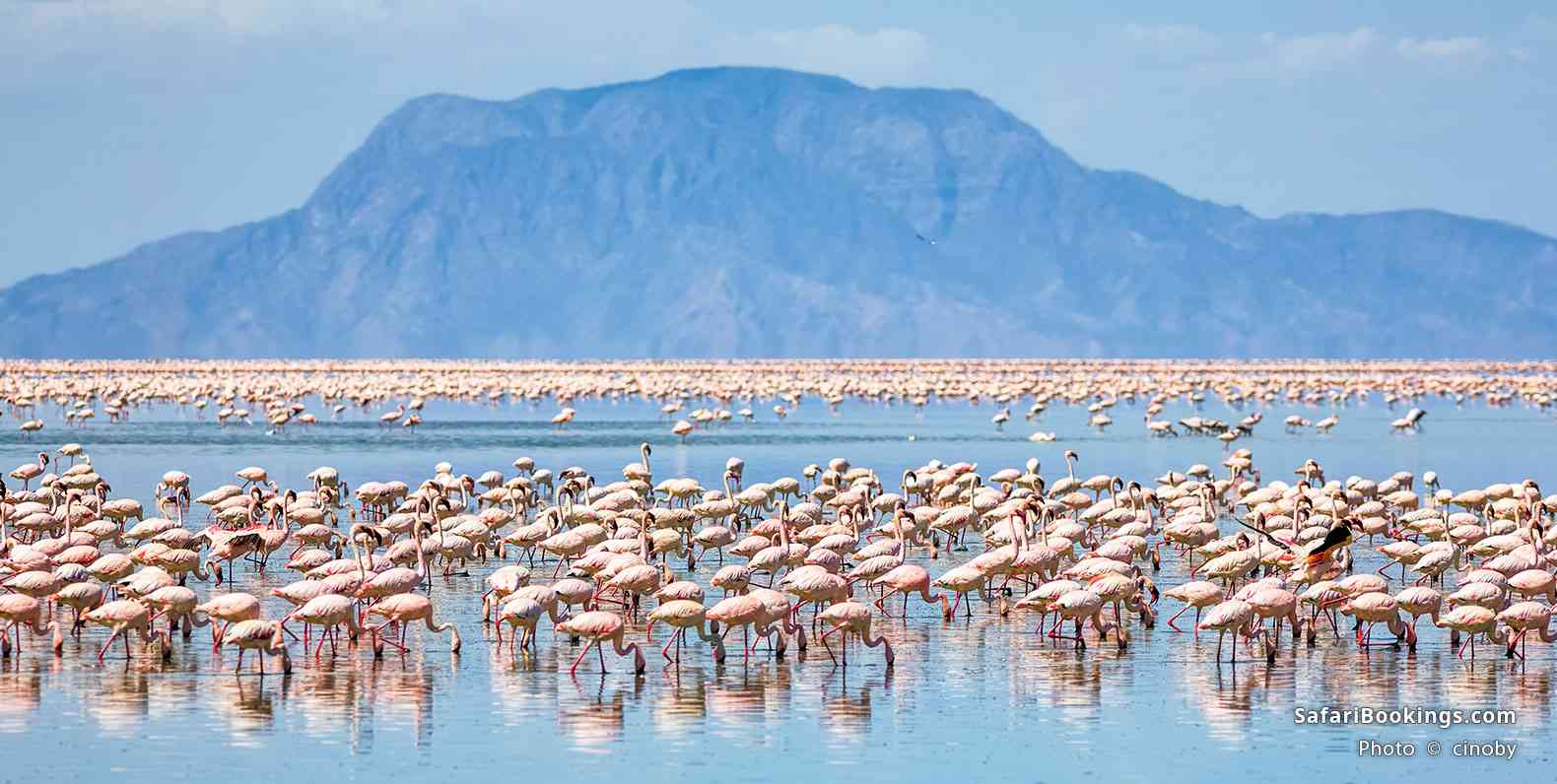 Lake Natron is the starkest of Tanzania’s Rift Valley lakes. The shallow caustic waters are covered by a crust of volcanic ash and salt with numerous hot springs bubbling on the surface. Incredibly, Lake Natron is the only known breeding ground for lesser flamingos in East Africa. Towering over this strangely beautiful scene is Ol Doinyo Lengai, meaning ‘Mountain of God’. If you’re feeling adventurous you can climb this active volcano. The trip takes about five to six hours and is usually done at night. 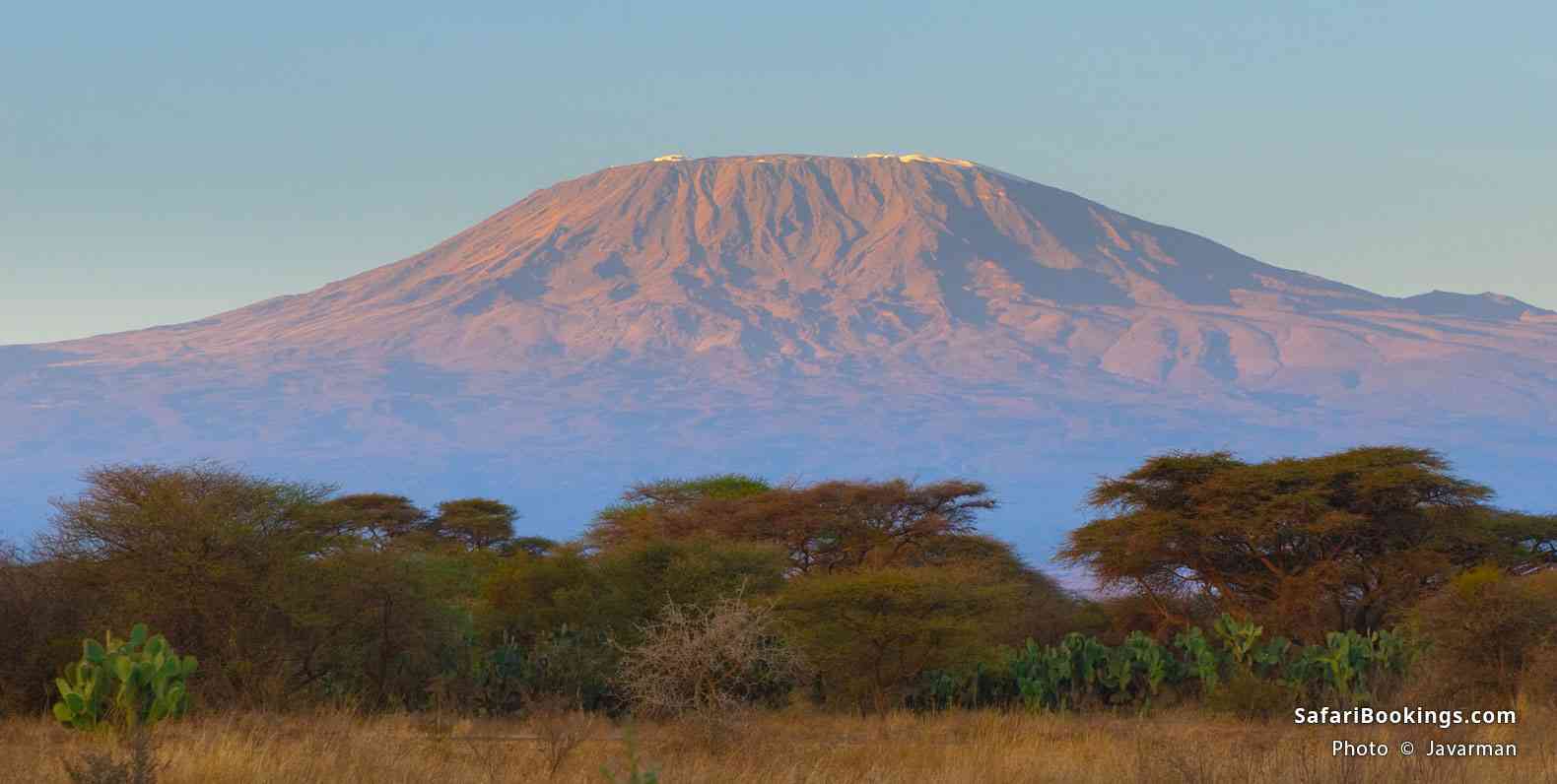 Mt Kilimanjaro is Africa’s tallest peak and the world’s highest freestanding mountain. It towers almost 5km/3mi above the African savannah below. No wonder that climbing to the summit (5,895m/19,340ft) is one of Africa’s top bucket-list experiences. If you’re fit enough, the five- to eight-day trek to Uhuru Peak is highly rewarding. But if this isn’t your cup of tea, you might still be able to see this famous landmark in all its glory when staying in Moshi or Arusha. Although mostly covered in clouds, the snowcapped peaks are often briefly visible at dawn and dusk. 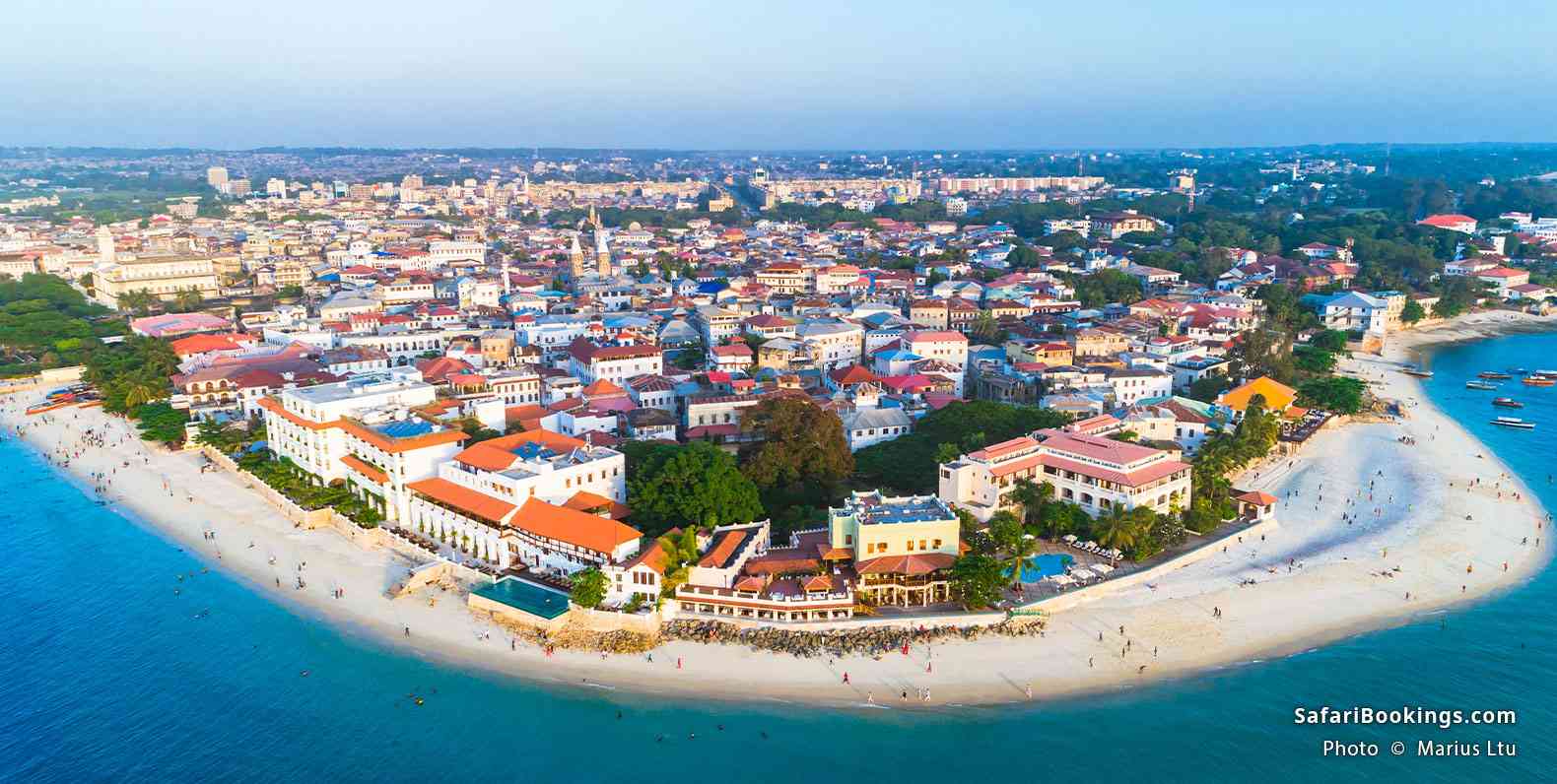 Set in the Indian Ocean off mainland Tanzania is East Africa’s legendary Spice Island, Zanzibar. This is the perfect post-safari retreat where you can chill for a few days on an idyllic beach with a good book or a refreshing cocktail. Protective reefs create perfect swimming conditions in the balmy warm waters. Zanzibar is more than just a beach holiday destination though. Head out to Mnemba Atoll for world-class diving, learn about Swahili culture in the historic Stone Town, explore rural Zanzibar on a spice tour and look for Zanzibar red colobus monkeys in Jozani Forest. To meet the locals and sample delicious seafood, visit the night market at Forodhani Gardens. 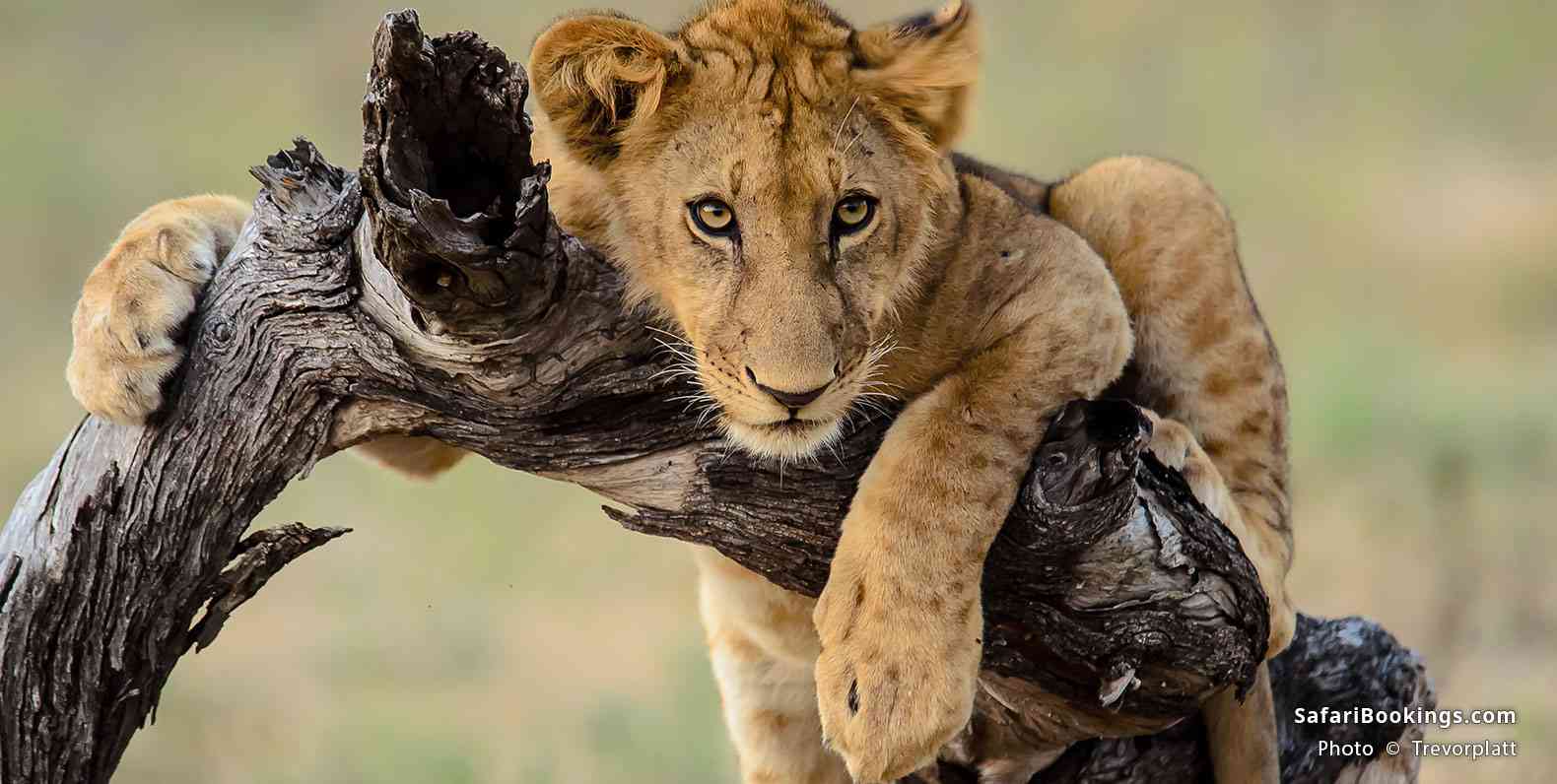 The vast wilderness of Nyerere National Park (formerly Selous Game Reserve) is another one of the best places to visit in Tanzania. Game drives are usually conducted along a string of lakes, the hunting ground of opportunistic lions lying in wait for thirsty animals coming to drink. And boat trips on the sluggish Rufiji River are a highlight of any stay here. Expect close-up encounters with monstrous crocodiles and dodging an incredible number of hippos. Elephants often come to drink in the late afternoon and you might even see them swimming across the river. 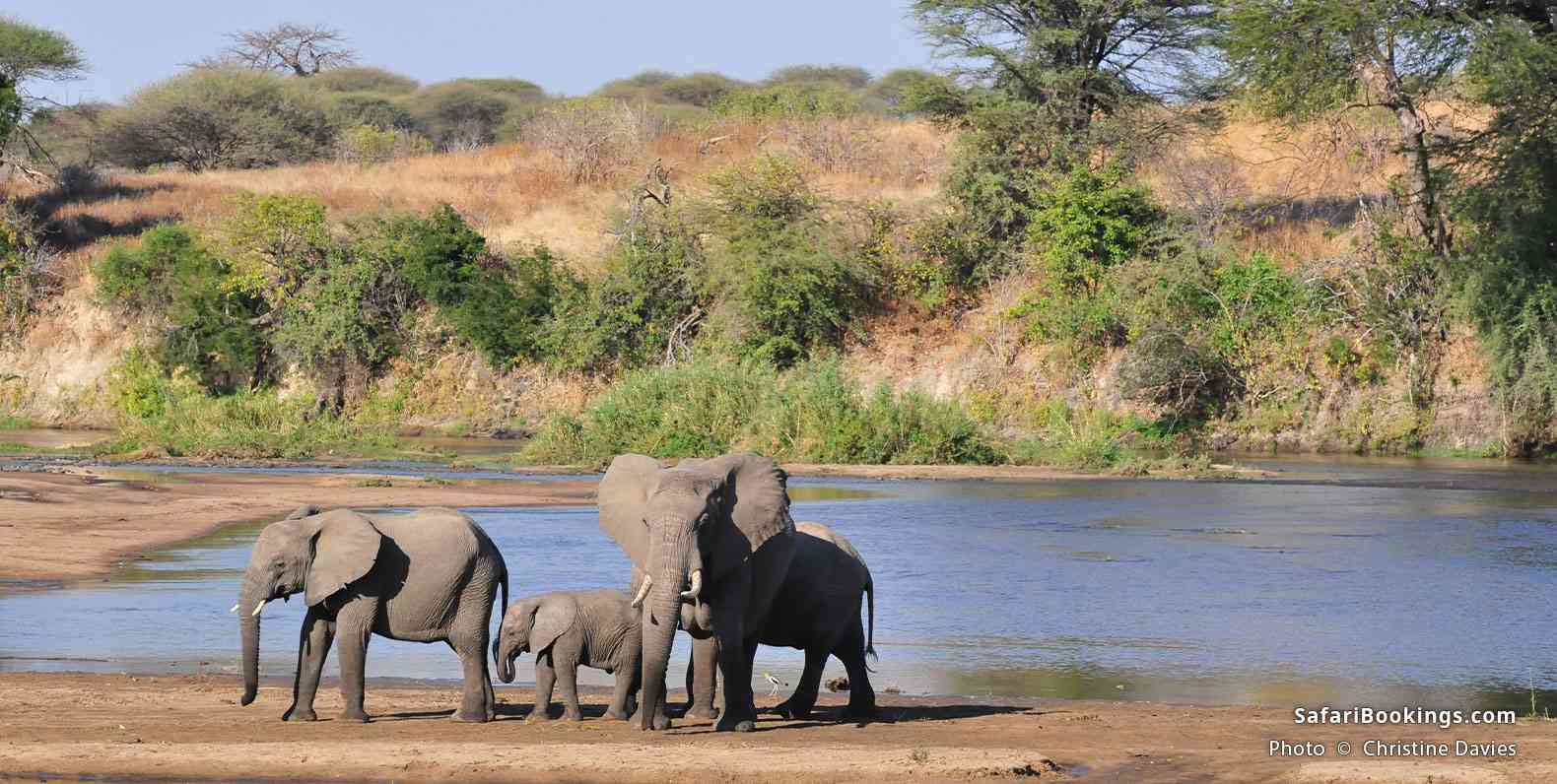 Ruaha National Park offers the perfect combination of diverse wildlife viewing, rugged scenery and wilderness vibe. No wonder it’s a favorite among many Africa aficionados. Carnivore viewing in Ruaha is exceptional. There are prides of 20-plus lions, good numbers of leopard and cheetah, and several packs of African wild dog. Other wildlife includes large herds of elephant, and an unusually varied selection of antelope, including sable, roan and greater kudu. 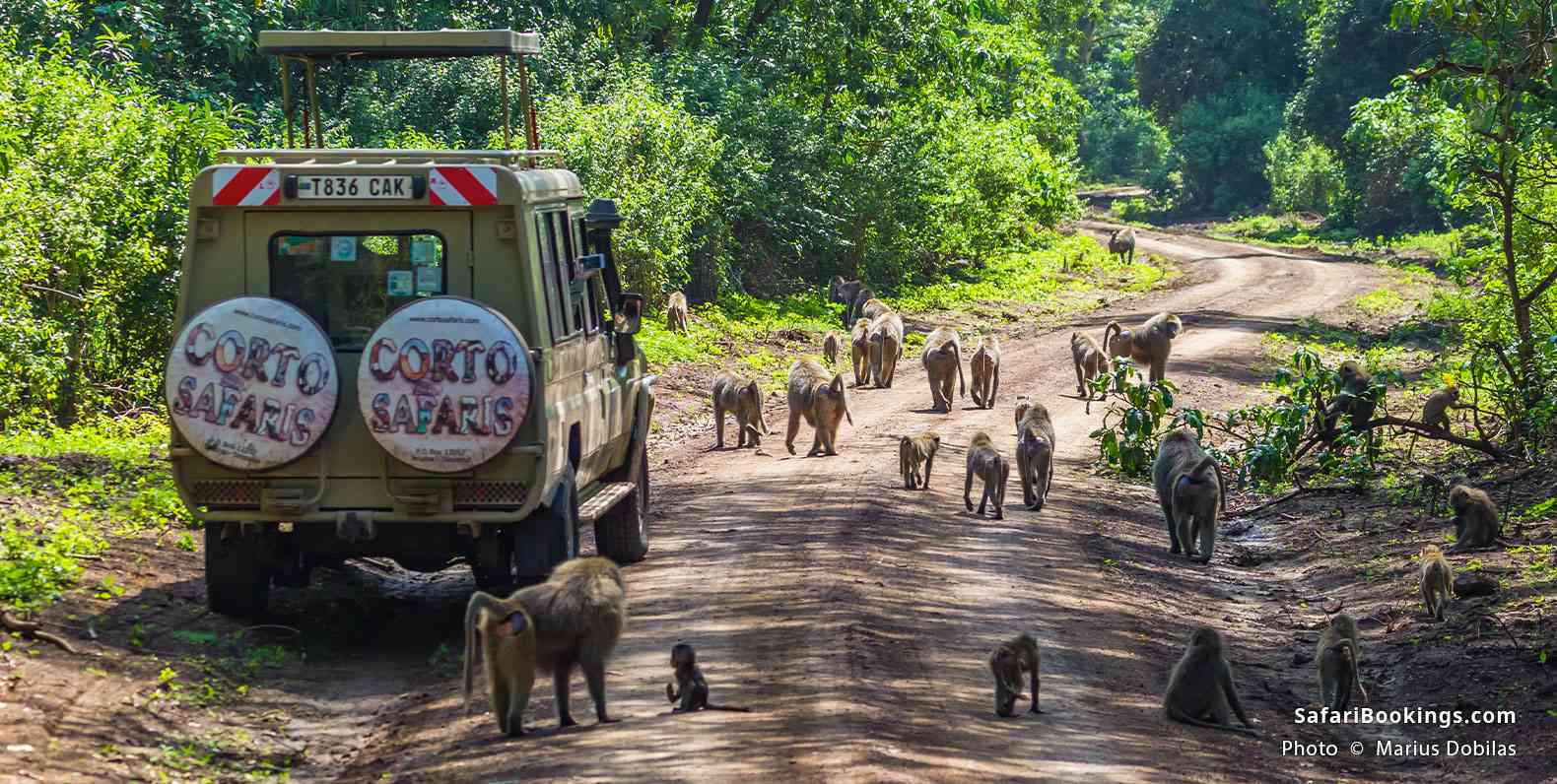 Lake Manyara National Park is home to an amazing variety of habitats, including its Rift Valley soda lake, grassy floodplains, lush groundwater forest, dense acacia woodland and steep mountainsides. Blue monkeys and olive baboons are a permanent presence in the forest, elephants are plentiful and if you’re lucky you might see tree-climbing lions. The birdlife is prolific and big flocks of pink flamingos regularly feed in the lake. 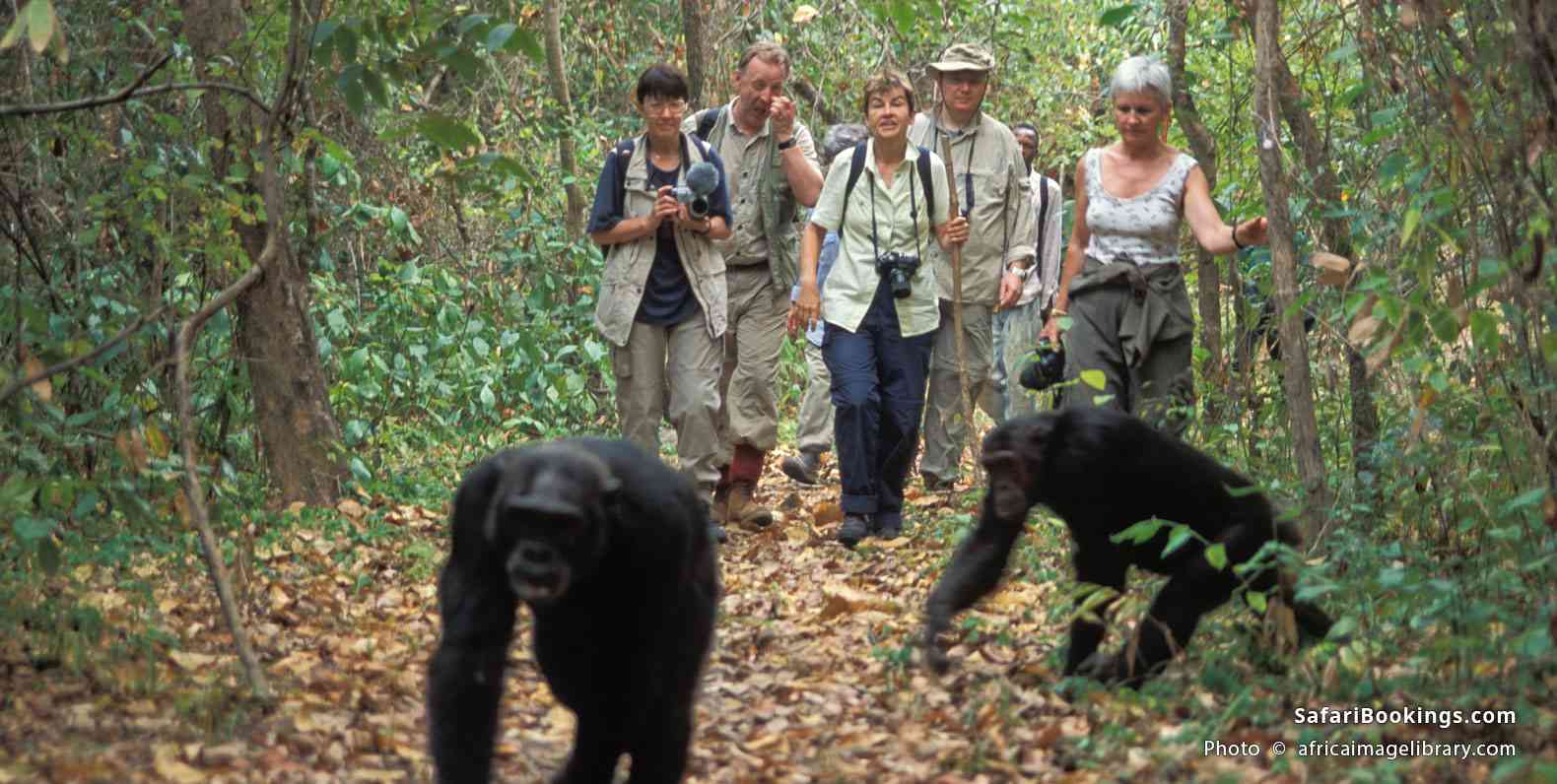 Although not very well known, Mahale Mountains National Park is definitely one of the best places to visit in Tanzania. This remote park in the Albertine Rift is set on the sandy shore of Lake Tanganyika below the jungle-clad Mahale Mountains. The atmosphere is something straight from the book Robinson Crusoe and it would be worth heading out here for the incredible beauty alone. However, the main attraction is a community of wild chimpanzees, habituated by Japanese researchers in the 1960s. Mornings are usually spent tracking these charismatic great apes while afternoons are spent boating, swimming, bird watching, hiking or just chilling on the beach.