Tanzania Voted the Best Safari Country of Africa in 2013

Wouter found time to combine his professional expertise with his greatest passion- the African Safari. In this union of business and leisure, SafariBookings was born.

THE NETHERLANDS - SafariBookings.com conducted an in-depth analysis of 3,061 reviews of safari tourists and acclaimed experts and concluded that both have voted Tanzania as the best safari country of Africa.

Over the past two years a distinctive SafariBookings taskforce searched for those who have been on safari and invited them to write a review. As a result, over 1,000 people from 53 nationalities wrote more than 2,300 user reviews.

The overall average rating of Tanzania in both the user and expert reviews is 4.8 out of 5 stars: the highest score of all 8 major safari countries.

Why is Tanzania such a great safari destination?

Ratings for the 8 major safari countries

When looking at the ratings above it can be concluded that all 8 countries are excellent safari destinations as they all have a rating of 4 stars and up. In general the experts were more critical than normal safari tourists, which is to be expected as they have visited far more countries and parks and have a better sense of what’s on offer. Of the user reviews 42% came from first time safari goers and, in general, they are more easily impressed.

What the experts say about Tanzania

What safari tourists say about Tanzania

104 people from 23 nationalities
The word cloud above is generated by gathering all the words from all user reviews for Tanzania. The more often a word occurred the larger it appears. ‘Serengeti’ and ‘Ngorongoro crater’ are the two most famous parks of Tanzania. Both are located in the northern safari circuit and both are Unesco World Heritage Sites. ‘Arusha’ refers to Arusha National Park and Arusha city, from where most safaris to the northern circuit start. Zanzibar is a tropical island and a popular destination for beach extensions. The rest of the larger words speak for themselves. 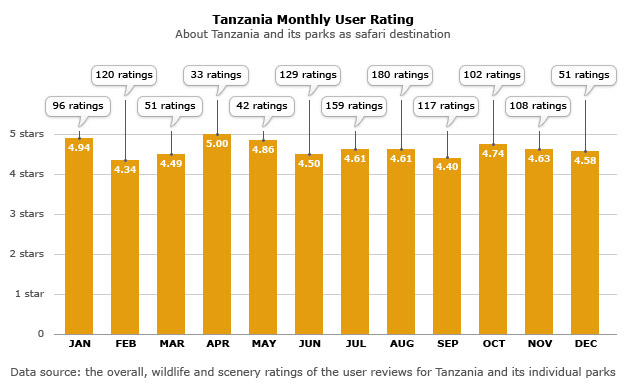 The monthly user ratings show that Tanzania can satisfy safari tourists at any time of the year. The consistent high ratings were surprising, since we projected lower ratings for the wet seasons (the long rains in March to April, and the short rains of November and December). The occurring rains (often in the form of afternoon showers) don’t typically hamper a safari , yet wildlife viewing in Tarangire, the southern and western circuit parks is considerably less rewarding during these times and could, therefore, effectively lower ratings.

Our point of view lends itself to the dry-season (June to October) being the best time to visit Tanzania. Wildlife viewing in the northern safari circuit is good at any time of the year. The best chance to see the wildebeest migration in the Serengeti is during June and July, while January to February is the time to see the wildebeest calving.

Please read our ‘Best time to visit Tanzania’ page for a more in dept recommendation.

Demographics of the reviewers (interactive charts)

Percentage of reviews by country
All user reviews. Move your cursor over a country to get the number

Age and gender (Percentage)
All people who wrote user reviews. Move your cursor over the chart for more details

Safari Experience Level (Percentage)
All people who wrote user reviews. Move your cursor over the chart for more details

Have a question about this article?

Wouter found time to combine his professional expertise with his greatest passion- the African Safari. In this union of business and leisure, SafariBookings was born.